CSBS’s fourth quarter 2019 Community Bank Sentiment Index (CBSI), while steady and signaling an overall optimistic attitude, revealed another decline in the outlook for profitability. And while the overall score for future profitability is still slightly positive, there are some interesting differences between the group of banks that expect higher profitability from those with lower profit expectations. Additionally, the profitability outlook across the five CSBS Districts (map) is not uniform, nor are District trends, in this component index since the inaugural CBSI second quarter 2019 survey.

Chart 1 shows that the component index for profitability has fallen from 125 in CSBS’s initial survey in the second quarter of 2019 to 109 in the latest survey, while the overall index has remained in a narrow range between 121 and 123. And while an index reading of 109 still indicates a positive outlook for profitability, this 16-point drop since the survey began is the largest decline among the index’s seven components (business conditions, monetary policy, regulatory burden, capital spending, operations expansion, profitability and franchise value). 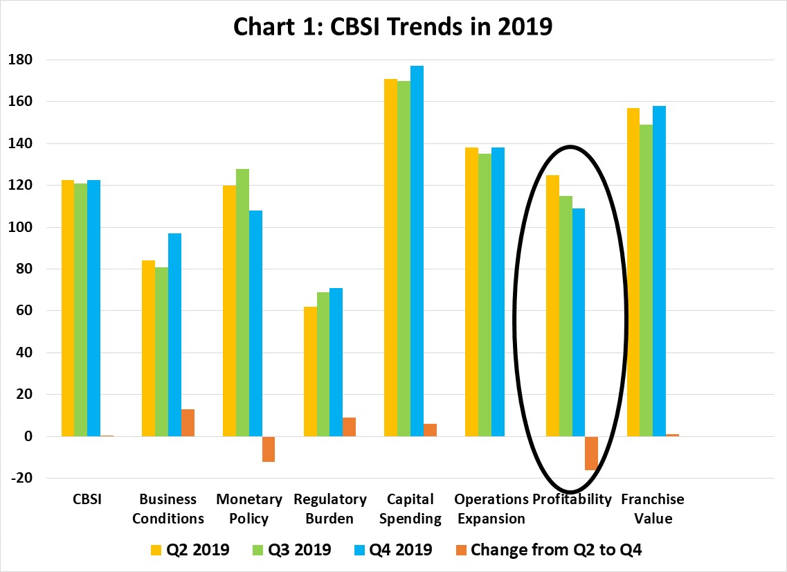 -16
The profitability outlook for community banks overall has dropped 16 points in two quarters. 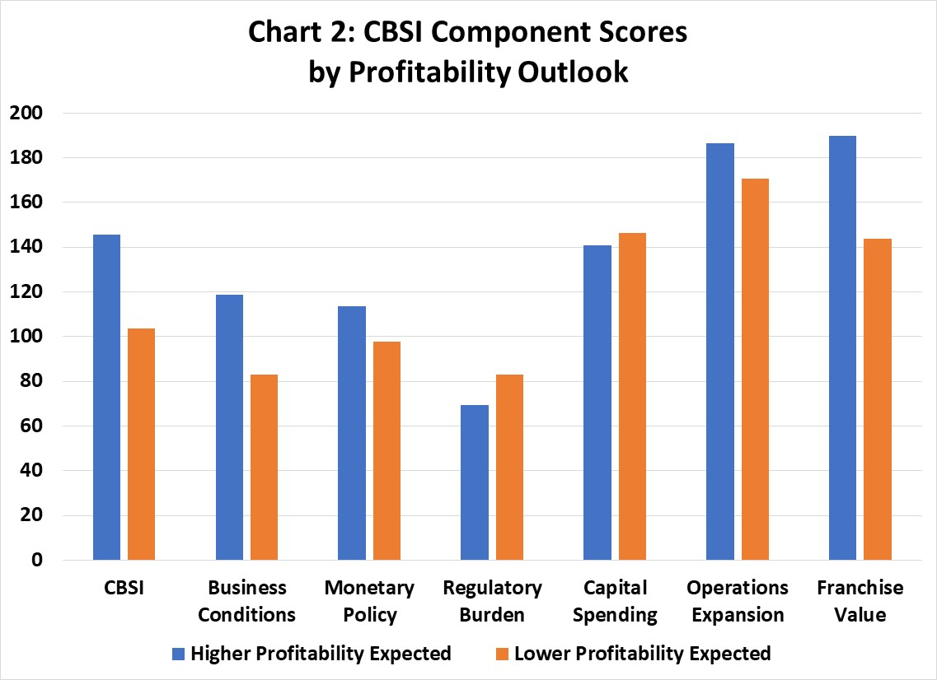 There are also no statistically significant differences between these groups of banks for certain bank condition and performance measures like total assets, return on assets (ROA), and non-performing assets to total assets. But there are significant differences for other metrics. Compared to the group of banks with lower profit expectations, banks with a positive profitability outlook have a significantly wider net interest margin (4.12% versus 3.90%), higher past-due loans to total loans and leases (2.17% versus 1.65%) and lower Tier 1 capital ratios (15.7% versus 18.1%).

Great Plains
Banks in the Great Plains are more optimistic according to both the future profitability component and overall CBSI, whereas bankers in the Northeast are currently the most pessimistic on both indices.

Concerns about future profitability do not appear to be equally shared across the five CSBS Districts. Chart 3 shows that District 4 (Great Plains) banks are more optimistic according to both the future profitability component and overall CBSI, whereas bankers in District 1 (Northeast) are currently the most pessimistic on both indices. 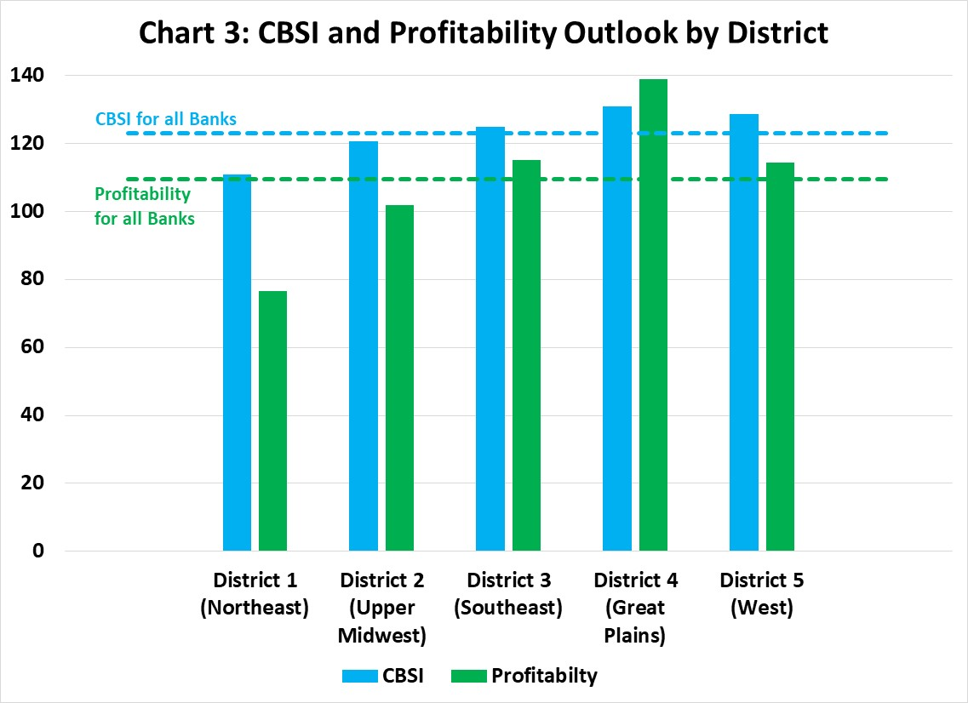 Moreover, Chart 4 shows that the change in both the CBSI and profitability score from the second quarter 2019 survey to the fourth quarter 2019 survey has increased the most in District 4 and fallen the most in District 1. It is worth noting, however, that the number of respondents to our survey is not uniform across each District, and there could be larger statistical variability with smaller sample sizes in some districts. There are, indeed, some limitations to the robustness of these results given that respondents participate on a self-selected basis. 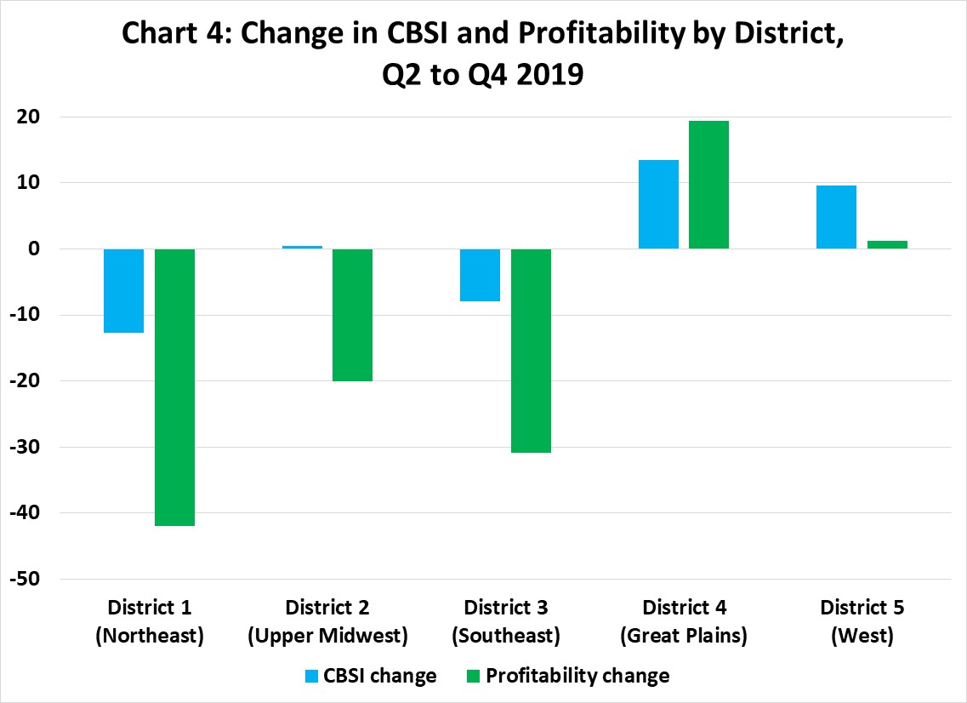 In summary, while the CSBS fourth quarter survey of community bankers indicated roughly the same overall positive outlook as the previous two quarterly surveys, the component that measures future profitability has suffered a large downward slide. And although the overall profitability outlook still remains slightly positive, there are some interesting geographic differences when comparing scores against the second quarter 2019 survey. Banks in the Northeast appear to be the most concerned and expect lower profitability, banks in the Upper Midwest and Southeast have lowered their profit expectations although they remain positive, and bankers in the Great Plains and the West have an improved profit outlook. Furthermore, banks with a positive profit outlook tend to have a more positive assessment on the other CBSI component measures as compared to banks with a lower profit outlook.