From 2016 to 2017, annual compliance costs at community banks declined by 13 percent to $4.6 billion, according the most recent national survey conducted by the Conference of State Bank Supervisors (CSBS). 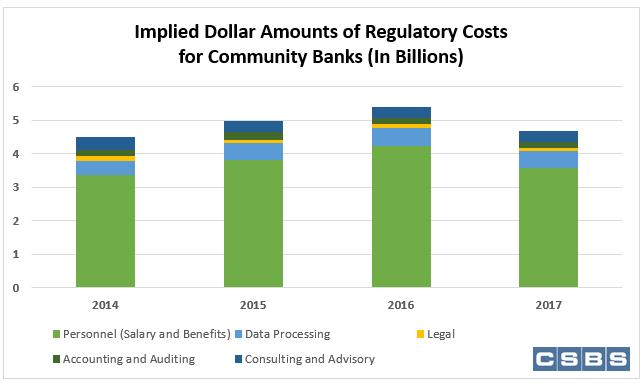 Personnel, data processing, legal, accounting and auditing costs all declined for community banks from 2016 to 2017. The drop could be attributed to community banks being more efficient at meeting regulatory requirements or regulatory changes coming from the 2016 EGRPRA review, according to the survey’s conclusions.

One area did increase, though. Consulting and advisory costs related to regulatory compliance went up six percent to $328 billion. And despite the overall drop, compliance costs were cited as a key factor for community banks considering whether to be acquired.

“We are pleased that compliance costs have declined, as federal and state regulators move towards more tailored regulation of financial institutions,” said John W. Ryan, CSBS president and CEO. “However, compliance costs clearly are still a concern for community bankers and impact their business decisions.”

The survey, conducted from April through June 2018, captured responses received from 521 community banks in 37 states. The survey was released earlier this month at the sixth annual Community Banking in the 21st Century Research and Policy Conference, co-sponsored by the Federal Reserve, CSBS and FDIC.

Blog post
State and Federal Coordination in Consumer Finance Sphere
State regulators and the CFPB actively find ways to work together as for successful regulatory oversight, especially when it comes to the consumer finance industry. Here is an example.
learn more
Aug 6, 2020
Blog post
OCC’s Activities and Operations Rule Would Undermine the Dual Banking System
The OCC should rescind portions of its proposed rule on the activities and operations of national banks related to non-branch offices, state regulators said in a comment letter.
learn more
Aug 3, 2020
Blog post
The Shape of Things to Come: A Reverse-Radical Recovery?
What will the economic recovery look like this time? CSBS Senior Economist Tom Siems looks at past recessions and recoveries to consider a path foward.
learn more
Aug 3, 2020
Blog post
Ideas Matter: Are We All Keynesians Now?
CSBS's Tom Siems and Nathan Ross reflect on the legacy of Milton Friedman, born 108 years ago today.
learn more
Jul 31, 2020