The Economy in Quicksand: When Will We Escape This Quagmire?

With the  U.S. Bureau of Economic Analysis’s announcement that real GDP dropped 4.8% in the first quarter of 2020 and with the U.S. economy mostly in lockdown throughout the month of April to contain the spread of COVID-19, all indicators are pointing to a severe economic contraction that likely began in March 2020. Over the last six weeks, more than 30 million Americans have filed for unemployment insurance benefits―that is roughly the population of Texas―and another 3 million could be added later this week. Consumer and business confidence have plummeted to levels not seen since the depths of the Great Recession in 2008-09. And government policymakers have gone to great lengths in an attempt to blunt the impact to affected workers and businesses. Call this recession the Great Lockdown.

Although the death toll from COVID-19 continues to rise, there are signs that April 2020 will end up being the worst month of the economic crisis as some states and businesses begin to reopen. The questions now are “How bad will this recession be?” and “When will the recovery begin?” While answering such questions are always fraught with great uncertainty, Moody’s Analytics has developed a few scenarios that can help to see some possible paths out of the current quagmire.

The nearby charts show that their scenarios are basically built according to assumptions about when the economy reopens for business: May (dark blue), June (light blue), July (green) or August (orange). One chart shows the percentage change in year-over year GDP growth, and another shows the U.S. unemployment rate for each scenario. Note that the unemployment rate is shown on a quarterly basis as the average of the three months in the quarter. It is likely that the April unemployment rate will top 16% when the official numbers are released later this week, a level never seen since the survey began in 1948.

For all scenarios, the recovery begins in the third quarter of 2020, but each recovery has a slight pause, or slowdown, as businesses and consumers learn to adjust to a “new normal” based on social distancing practices, increased caution, and the likelihood that businesses based on large gatherings of people (sports and entertainment venues, industry conferences, travel, etc.) will be the last to reopen. For the chart showing GDP growth, the W-shaped recovery (May Reopening) is increasingly stretched into more of a U-shaped pattern (August Reopening) the longer it takes to get the economy back to business. For the unemployment rate forecasts, the biggest spike under each scenario is expected to be in the second quarter 2020.

How do these scenario predictions compare to previous recessions? One way to compare economic downturns is to examine the total GDP decline from the peak (or start) of the recession to the trough (or end) when the economic recovery begins. The nearby chart shows the fourteen recessions over the past 90 years, as well as the four Moody’s Analytics scenarios for how the current recession might proceed. The “May Reopen” scenario has a peak-to-trough decline of about 10.5%, whereas the “August Reopen” scenario declines by roughly 14%. By way of comparison, the Great Recession of 2008-09 had a peak-to-trough decline of about 4%, the Great Depression declined more than 25%, and the 1945 recession dropped by nearly 12.5%. 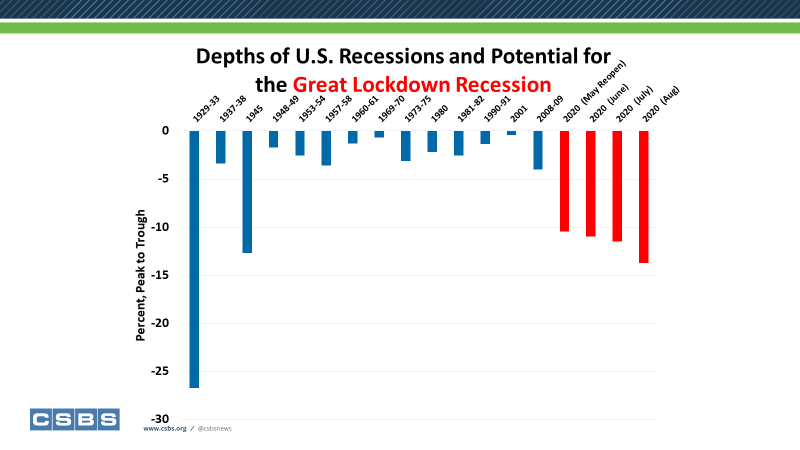 While not shown here, the length of the Great Recession was 18 months, the Great Depression lasted 43 months, and the 1945 recession was 6 months. The current recession is likely to be short but very deep; most like the 1945 recession when soldiers returned home from war while businesses took a few months to ramp up and hire needed workers. Of course, the big difference today is that the enemy (COVID-19) is still out there.

Consumer and business resumption of economic activity on the level of what we experienced just a few months ago is not likely until this invisible enemy is defeated and business-people and consumers are again confident to rejoin large gatherings and engage freely with each other. Indeed, regaining confidence is key. There is still a lot of uncertainty out there: about the virus, about how/when businesses might reopen, about consumer behavior in a mask-dominated economy, about the effectiveness of government stimulus programs and about what kind of unexpected and unintended consequences could result from recent “fixes” to the economy. Together, we will find a way out of this quicksand economy, but the path out remains murky.