"Age is strictly a case of mind over matter. If you don't mind, it doesn't matter."
– Comedian Jack Benny, born on this day in 1894

Community bankers responding to the fourth quarter 2019 Community Bank Sentiment Index (CBSI) survey judged that the balance of risks to 2020 economic growth is weighted more to the downside, but they are not nearly as downbeat as professional economists. Moreover, bankers’ assessment of risks to 2020 economic growth is not uniform across the five CSBS Districts (map).

As shown in Chart 1, for the full sample of 208 banks, most bankers (33%) answered that the balance of risks to 2020 economic growth is weighted more to the downside, with 21% saying the risks are more to the upside, 30% said neither, and 16% said they did not know or are unsure. When examined by CSBS District, we find similar conclusions to those when investigating bankers’ outlook for profitability. District 1 bankers have the most pessimistic view of 2020 economic growth. District 2 (Upper Midwest) and District 4 (Great Plains) bankers also have more “downside” responses than “upside” responses, whereas District 3 (Southeast) and District 5 (West) bankers judge 2020 economic risks as roughly balanced.

By way of comparison, the National Association of Business Economics’ (NABE) Outlook Survey was conducted in mid-November, about one month before the CSBS survey, and asked similar questions. In the NABE survey, 53 professional economic forecasters indicate that the 2020 economic balance of risks are skewed much more to the downside (71%), with 19% of respondents believing the balance of risks are to the upside and the remaining 10% supposing they will be equally balanced.

By a large margin, 34% of bankers said the single greatest downside risk to 2020 economic growth is a “political or geopolitical event,” with all five CSBS Districts listing this risk as the top concern. The other top answers to this question are a “global growth slowdown” (15%), “manufacturing weakness spilling over to reduced consumer spending” (10%) and “trade policy (increased protectionism)” (9%). The NABE panelists ranked “trade policy” (50%) as the single greatest downside risk, followed by “political or geopolitical event” (14%) and “global growth slowdown” (10%). 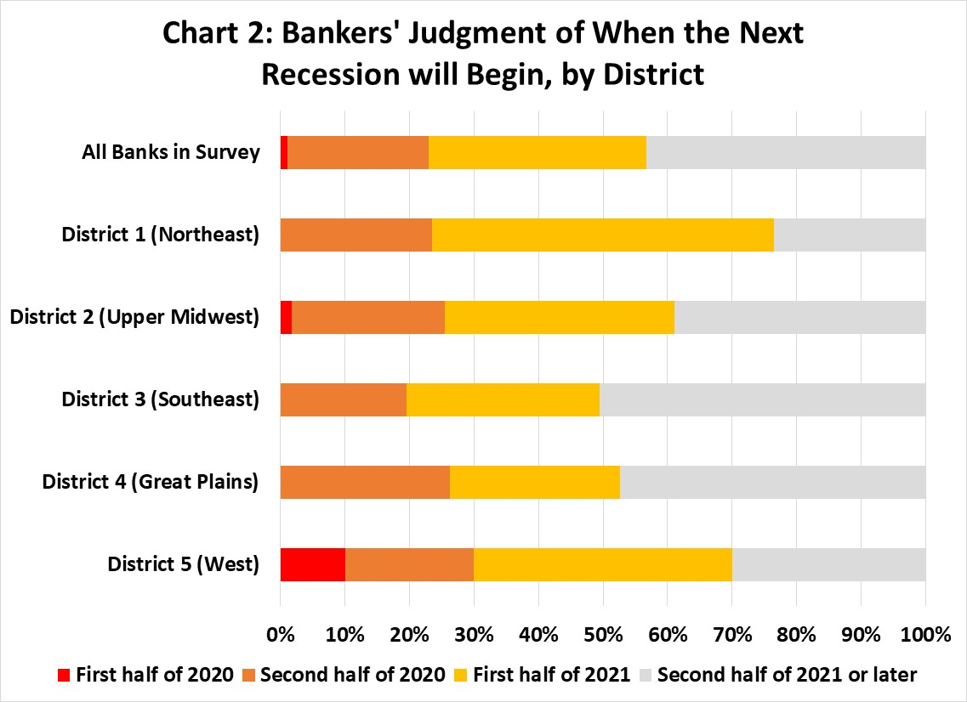 In summary, bankers’ assessment of risks to 2020 economic growth lean to the downside but are not as negative as professional economists. Bankers in the Southeast and West regions have a more balanced assessment of risks. According to surveyed bankers, the single greatest downside risk to 2020 economic growth is a political or geopolitical event, whereas the top candidates as the single greatest upside risk are lower interest rates, trade policy and a prolonged Fed pause. Twenty-three percent of bankers expect the next recession to begin in 2020.

CSBS released a survey of consumer lending laws and regulations of all 50 states and Washington, D.C., alongside a new policy paper that examines the nonbank consumer finance marketplace.

John Ryan, CSBS president and CEO: “These resources offer a comprehensive look at the current state of U.S. consumer finance: the history of the industry and current supervision in the whitepaper and a nationwide look at similarities and differences across licensing schemes in the survey. The information is vital to states looking to craft more uniform requirements and to industry, particularly new entrants, policymakers and consumer groups searching for a verified summary of state compliance requirements.”

All information contained in the survey is verified by the relevant state regulatory authority. The information will be updated on an annual basis and expanded to include usury restrictions.

The state consumer law survey is one of 11 commitments state regulators made to strengthen and streamline state regulation based on CSBS Fintech Industry Advisory Panel recommendations. It is also a key part of CSBS Vision 2020, a bundle of initiatives driving toward a more uniform and networked system of nonbank licensing and supervision.

The overview of nonbank consumer finance focuses on personal, auto, student, small dollar and payday loans as well as online and fintech lending. It is part of an ongoing series titled Reengineering Nonbank Supervision.

Simply Soundbites is a new mini-series on the Simply Stated Podcast, where the guest of the week explains a complex topic or definition from the news in ten minutes or less.

We ask Darryle Rude, Chief Examiner at the Utah Department of Financial Institutions, what an Industrial Loan Corporation is (also known as an Industrial Bank or ILC).

Editors Note: At 3:28, we discuss a "loophole" for ILCs. From a technical perspective, it is an exemption for ILCs, not a loophole.