The U.S. Department of Labor just released what is arguably the first official economic report that shows the beginning of the devastating impact that the novel coronavirus, known as COVID-19, will have on the U.S. employment situation. While economists expected a record increase in weekly jobless claims for the week ending March 21, the 3,283,000 increase was a stunning tidal wave surge from the previous week’s 281,000 initial claims and dramatically eclipsed the previous record of 695,000 set during the 1982 recession and the weekly peak of 665,000 during the 2008-09 financial crisis (see Chart 1). 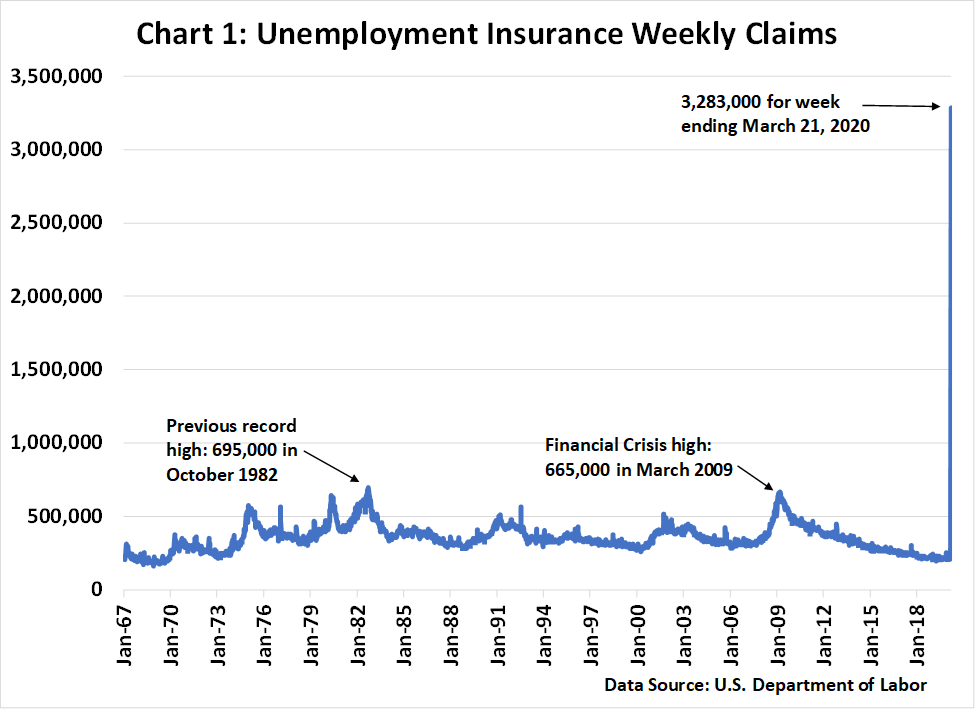 Using only these new initial claims data, I calculate that the U.S. unemployment rate would immediately rise from its February level of 3.5% to roughly 5.3%, an increase of 1.8 percentage points. To put this in perspective, the largest one-month increase in the U.S. unemployment rate during the 2008-09 financial crisis was 0.5 percentage point, rising by that much for each of three consecutive months from December 2008 through February 2009 (climbing from 6.8% to 8.3% over these three months and subsequently peaking at 10% in October 2009). 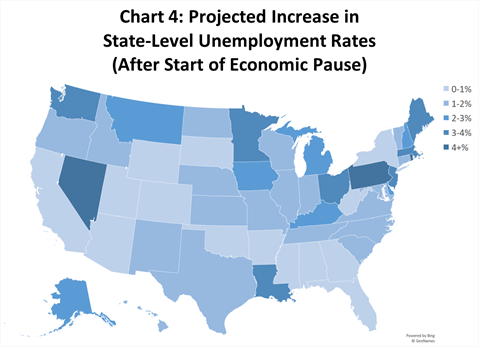 Based on these calculations, the states with the largest projected increases in state-level unemployment rates are expected to be Rhode Island (3.4% to 9.8%), Nevada (3.6% to 9.6%), and Pennsylvania (4.7% to 10.5%). For the most populous states, the projected unemployment rate increases are as follows: California (3.9% to 4.8%), Texas (3.5% to 4.6%), Florida (2.8% to 3.5%) and New York (3.8% to 4.7%), all near a one percentage point increase. These are stunning, almost unfathomable increases, except that we all know why it is happening. With business and school closures across the nation, government lockdowns in many areas, and people staying home and not traveling or going anywhere, thousands of people have been, and will continue to be, forced onto the unemployment rolls. The economy has been put on pause.

In an attempt to blunt the impact that this economic pause will have, fiscal policymakers have crafted legislation to provide assistance to parts of the economy that have been adversely affected. Businesses, both large and small, will be offered loans and incentivized to keep employees on their payrolls. Many households and individuals will receive direct aid. State and local governments will receive support. And the U.S. Treasury Department was given funds to support additional emergency lending programs. At nearly $2 trillion, it is the largest economic rescue package in American history.

Furthermore, monetary policymakers have not been standing idle. While my last blog outlined several policies, programs and facilities that the Federal Reserve initiated earlier this month, they have continued with more aggressive actions to keep money and credit flowing in the financial markets and the overall economy. As the nation’s “lender of last resort,” the Fed has pulled out all the stops and has the ability to support $4 trillion in additional emergency lending.

The economic fallout from COVID-19 has been swift and dramatic. And while more damage is likely, it bears repeating that the U.S. economy went into this COVID-19 health crisis in a very good place: U.S. unemployment rates were at 50-year lows; inflation was low and stable; and economic growth was tracking slightly above 2% annually. But with an economy that depends primarily on the consumer for growth and sustainability, an economic recovery will happen only after the spread of COVID-19 is contained and consumers regain confidence to travel, dine out, shop, go to the theater, attend sporting and cultural events, etc.

I (already) long for those days to return! Yet, every day, I become even more grateful for the nation we live in and call home. It’s been encouraging to see my fellow Americans looking out for one another and showing their irrepressible spirit. In time, we will overcome, and I hope we will be better and stronger than before. As we continue to fight this invisible enemy, take care of yourself. And take care of others.

This week, CSBS weighed in on several issues pertinent to the continued safety and soundness of the financial system, including emergency measures related to the current COVID-19 pandemic.

CSBS consumer protection staff have assembled a directory of resources to help consumers maintain their financial health during the COVID-19 pandemic. This resource contains useful information on how to:

With news occurring at a frenetic pace, we at Simply Stated realize it's hard to stay current. To help our audience stay up-to-date with the latest financial stories, regulations, guidance and more surrounding the pandemic, we've launched a new series of podcasts to deliver you a short, digestible roundup of the day's most important stories.

On Jan. 11, 2020, China reported the first known death from the novel coronavirus, now known as COVID-19. At the time, the Dow Jones Industrial Average (DJIA) Index of 30 large companies based in the United States stood at 28,824, still 2.5% below the peak level of 29,551 that it would eventually reach one month later. As of this writing, the Dow has been down more than 30% since it peaked on February 12, just five weeks ago. Moreover, the 10-year constant maturity Treasury Note, which was trading around 1.8% at the beginning of the year, has seen its yield drop to record lows below 1%, even trading below 0.5% in early March.

The nearby chart presents a timeline of when COVID-19 seriously infected these U.S. financial markets. As shown, the Dow continued to advance following news of China’s first known death from the virus, after the first case was confirmed in the U.S., after the World Health Organization (WHO) declared a global health emergency, after President Trump declared a national health emergency and banned travel with China, and after the Diamond Princess cruise ship carrying more than 3,700 people was quarantined in Japan. But in mid- to late-February, once COVID-19 cases emerged and subsequently surged in Italy, South Korea and Iran, and cases outside of China exceeded those within its borders, equity and bond markets both collapsed. 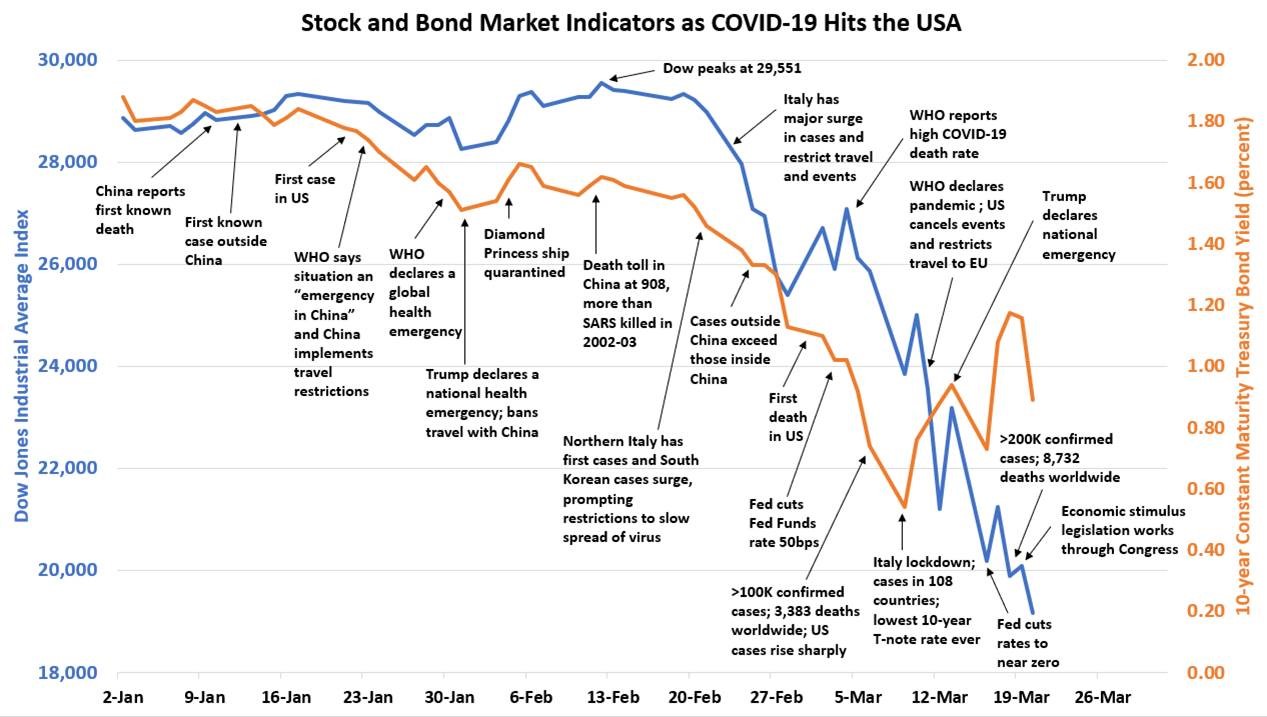 On February 29, the first U.S. patient died from COVID-19 in Washington state. And in early March, the Federal Reserve announced a 50-basis point reduction in the Federal Funds rate, in recognition that COVID-19 had, in effect, “mutated” to infect U.S. financial markets. A few days later, the WHO reported that COVID-19 has a much higher death rate than seasonal influenza and declared a global pandemic. Shortly thereafter, U.S. professional sports leagues, colleges and universities, conferences and concerts, and other events were postponed and canceled across the nation. Businesses and schools were encouraged to allow telecommuting where possible, cancel/reschedule events, and temporarily close operations where large groups can gather. Additionally, U.S. residents were encouraged to stay at home and not congregate in large groups.

In the past week, as equity markets have fallen further and funding markets strained, the Fed has unleashed several actions intended to provide liquidity to banks and businesses. The Fed dropped the Fed Funds rate to near zero percent, and as “the lender of last resort” they reinstituted several 2008-09 financial crisis era programs to further support smooth market functioning and facilitate the availability of credit to businesses and households. Moreover, fiscal policymakers have also recognized the need to help businesses and households and are actively working on legislation to provide emergency economic stimulus to the parts of the economy most in need.

The protective health measures encouraged by the government―designed to decrease the rapid spread of the virus and ease pressures on the U.S. healthcare system―has significantly transformed the way Americans interact, work and play. The short-term consequences have resulted in airlines significantly curtailing flight schedules; retail outlets, restaurants, bars, casinos and theme parks closing; and manufacturers and energy firms shuttering.

While it seems very likely that the U.S. economy has fallen into a recession, we lack official statistics to accurately assess the condition of the economy in real-time. But the recent magnitude of market intervention by fiscal and monetary policy authorities is clearly an attempt to lessen the impact on economic actors during this extensive “pause” in activity in many sectors of the economy.

So where will the U.S. economy and financial markets go from here? How much damage will COVID-19 do to the economy and how long will it continue to infect financial markets? I wish I knew. Because COVID-19 is highly contagious, more deadly than seasonal influenza, and has a longer incubation period than many viruses, no one really knows how long this will last. But I am confident we will all get through this together. Our nation and people are resilient. Take care of yourself. And take care of others.