"The only way to get rid of my fears is to make films about them."
― British film director Alfred Hitchcock was born on this day in 1899

State regulators are pleased by the Federal Financial Institutions Examination Council’s decision to grant the Appraisal Subcommittee’s (ASC) approval for a one-year extension to North Dakota’s temporary appraisal licensing requirement waiver. However, this is a short-term solution to what is truly a nationwide appraiser shortage that needs more attention.

The extended waiver allows banks in North Dakota to waive appraiser credentialing requirements for federally related commercial real estate transactions under $1 million through Aug. 7, 2021. North Dakota requested the waiver because a lack of available appraisers was negatively impacting the length of time for an appraisal to be completed. North Dakota asked for the extension due in part to the impact of the Covid-19 pandemic.

North Dakota Commissioner of Financial Institutions Lise Kruse: “We appreciate the extension and hope to make good use of the additional time to bring all parties together in addressing the appraiser shortage in North Dakota.”

FFIEC State Liaison Committee Chairman and Tennessee Department of Financial Institutions Commissioner Greg Gonzales: “The waiver is not the sole solution. We all need to come together to make changes in this space. State regulators want to work with Congress, banks and the appraisal industry to find a better way.”

An Unconventional Retrospective on How to Spot Recessions in Real-Time

Yogi Berra, the famous New York Yankees manager and master of pithy witticisms, once exclaimed, “You can observe a lot just by watching.” Economists spend much of their time eyeing statistics and surveys about prices, employment, inflation, spending, interest rates, trade, consumer behavior and other indicators to find clues that help them understand macroeconomic trends to spot turning points and make forecasts. And because economists often form gloomy predictions and construct doomsday scenarios, the discipline has been dubbed “the dismal science.” While the National Bureau of Economic Research (NBER) Business-Cycle Dating Committee is the official arbiter for calling the start and end dates for U.S. recessions, I am going down memory lane to reflect on my own thoughts and perspectives and lessons learned by looking for signs to detect economic slumps in real-time.

On June 8, the NBER Committee―the group of eight distinguished academic economists who serve as the nation’s authoritative voice for announcing start and end dates for recessions (aka the nation’s chief dismal scientists)―made the 2020 COVID-19/lockdown recession official. After a record 128 months of economic expansion since the end of the 2008-09 Great Recession, the official monthly peak in economic activity was declared as February 2020. Of course, by the first week of June, with more than 40 million Americans having filed initial claims for unemployment insurance over the preceding eight weeks and the reported U.S. unemployment rate hitting a post-World War II high of 14.7% in April, the national economy was clearly and firmly contracting with expectations that second quarter real Gross Domestic Product (GDP) would decline by a stunning 30-35%. (And it did…falling at a 32.9% compound annual rate.)

This might be the NBER Committee’s promptest “recession start date” announcement, but it still came after nearly everyone on the planet knew that the U.S. economy was in a severe recession. To be fair, the NBER Committee relies on official economic data that are produced monthly or quarterly and are often backward-looking, subject to revision, and not particularly timely.

For example, the NBER Committee determined that December 2007 was the peak month prior to the 2008-09 financial crisis, and made their announcement about it in November 2008, almost a full year after the downturn started. And the announcement for the trough? September 2010, or 15 months after the economy started to recover. I like timelier proclamations. Don’t you?

For sure, as shown in the nearby chart, the historical chronology maintained by the NBER is useful for instantly spotting economic expansions and contractions going back 165 years. To accurately select these dates, the NBER Committee examines and compares various measures of economic activity to determine the turning points, or the peaks and troughs, in the economy. They do not rely solely on large changes in real GDP―the main gauge used to track domestic economic output and growth―but rather consider a number of broad indicators, such as payroll employment, real income, industrial production, manufacturing and trade inventories and sales, and the like. 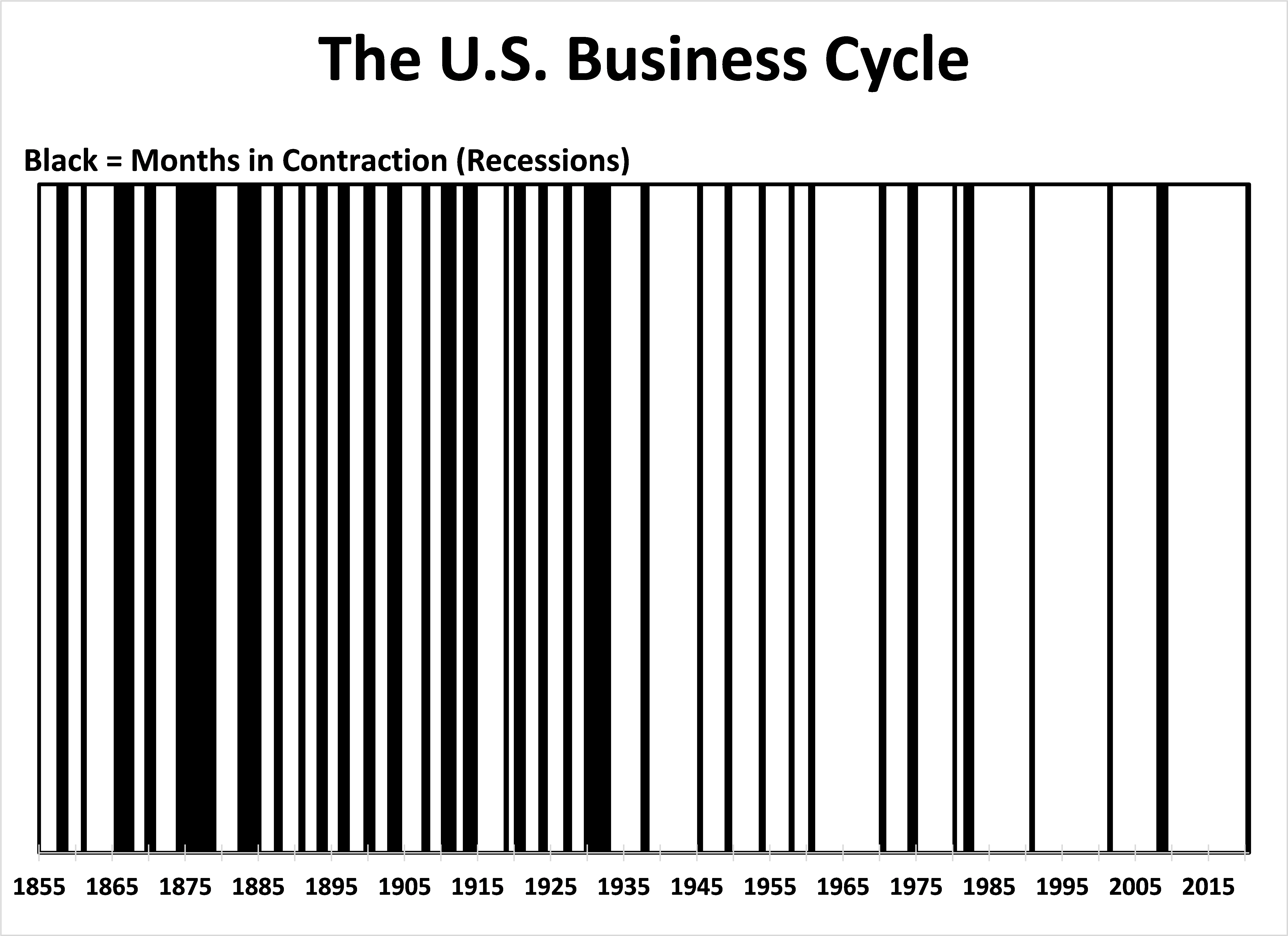 There are at least two fascinating things about the above chart: First, it looks like a typical barcode you might see on any random scannable product, and second, the black bars on the right side of the chart are much further apart than those on the left. In other words, there have been more and longer expansionary periods and far fewer recessions now than during the late 1800s and early 1900s.

Indeed, to date, less than one-eighth of my life has been spent suffering through recessionary stretches. But if I had been born in 1874, half my life would have been during economic slumps. That’s depressing! For today’s average-aged American, 9% of their life has been in a recession compared to 52% if they had been born 150 years ago.

Because of the usual long time-lag in waiting for the NBER Committee to provide the official recession start dates, I first began trying to spot real-time recession indicators about 30 years ago. In April 1991, the NBER Committee finally broadcast that the 1990-91 recession began in July 1990. But as early as 1989 there were at least three signs that a recession might be right around the corner.

First, the Federal Reserve’s monetary policy moves in 1988-89 were pretty aggressive and dramatic. The Fed increased the Fed Funds Target Rate―its primary and most important policy lever at the time―a total of 10 times from 6.5% in February 1988 to nearly 10% in May 1989. Then, in a swift about-face, the next month the Fed started to lower the target rate and did so five times over the next seven months to 8.25% by the end of 1989.

Second, the Savings and Loan Crisis during the late 1980s resulted in many weak financial institutions and volatile prices in real estate markets. And finally, the oil price shock coinciding with the Gulf War that began in August 1990 seems to have been the last impetus that tipped the U.S. economy over the edge. Lesson: Pay attention to Fed policy decisions and external shocks that impact consumer pocketbooks.

For the 2001 recession that officially began in March, and that was not-so-promptly declared as such eight months later by the NBER Committee, I was admittedly a few months early in pronouncing this slowing rate of growth. My real-time guess came on December 12, 2000. After several weeks of examining hanging chads from Florida voter punch cards in the U.S. presidential election, the Supreme Court ruled on Bush v. Gore, effectively ending the recount efforts and upholding the previously certified numbers. I was certain that after watching Americans wait in a cloud of uncertainty over the preceding 45 days, economic growth would soon suffer. Lesson: Pay attention when consumers are distracted and potentially sidelined from normal economic pursuits.

Then, prior to the 2008-09 financial crisis, sometime in July 2007, I first heard about NINJA loans made in some mortgage markets. NINJA…as in No Income, No Job or Assets needed to get a mortgage. Really? Leaders of several large corporations also told me that they were being offered more money than they needed at incredibly low interest rates with almost no commitments or collateral. Lesson: Pay attention to concerns raised by informed economic actors (Ninjas and free enterprise cannot coexist forever).

So, what were the recession triggers leading up to the current COVID-19/lockdown induced economic crunch?

I first sensed that the global economy was about to suffer on January 25, when Disney announced the closing of its Shanghai Disneyland theme park because of spreading concerns about the virus. But with U.S. stock markets continuing to advance and the Dow Jones Industrial Average hitting an all-time high on February 12, it appeared that the novel virus might be mostly contained and managed as previous coronaviruses had been and thus allow the U.S. economy to continue its historic climb.

But then, later in February, other nations―and Italy in particular―registered an alarming number of COVID-19 related deaths and it was clear that the virus would soon infect the U.S. economy. On March 4, the Fed started to go into full emergency funding mode and financial markets turned from euphoria the previous month to panic in March. By mid-March, it was clear that the longest expansion was over, and a deep U.S. recession was imminent.

For sure, March 11 was a stunning news day. First, the WHO finally declared COVID-19 a global pandemic. Second, the NBA suspended all future games after a player tested positive for COVID-19. Third, Oscar-winning actor Tom Hanks and his wife Rita Wilson said that they tested positive for COVID-19 and would quarantine themselves in Australia. And fourth, President Trump put in place restrictions on foreign travel to Europe as COVID-19 related problems escalated overseas. Suddenly, COVID-19 was everywhere: sports, entertainment and travel and considered a new disease for which most people likely had no immunity.

The next morning, it was evident that a U.S. recession had begun. At 11:45 a.m. on March 12, the Big 10 Men’s Basketball Tournament game between Michigan and Rutgers was cancelled, even as players warmed up on the court. And later that day the NCAA canceled both the men’s and women’s college basketball tournaments, known as March Madness. In an instant, March Sadness commenced…and the devasting economic repercussions from COVID-19 ensued.

Because of greater data collection and advanced information technologies, today’s dismal scientists can scrutinize high-frequency statistics that were previously unavailable. The charts below show several metrics that are released daily (and one weekly) that clearly show that around March 12―noted here as the beginning of March Sadness―the economy collapsed. With growing fears and uncertainty about COVID-19, lockdown orders from government authorities, and new protocols for business operations causing many to shutter, consumers and businesses withdrew from normal economic engagement. Lesson: Pay attention to global forces and their impact on high-frequency consumer and business information. 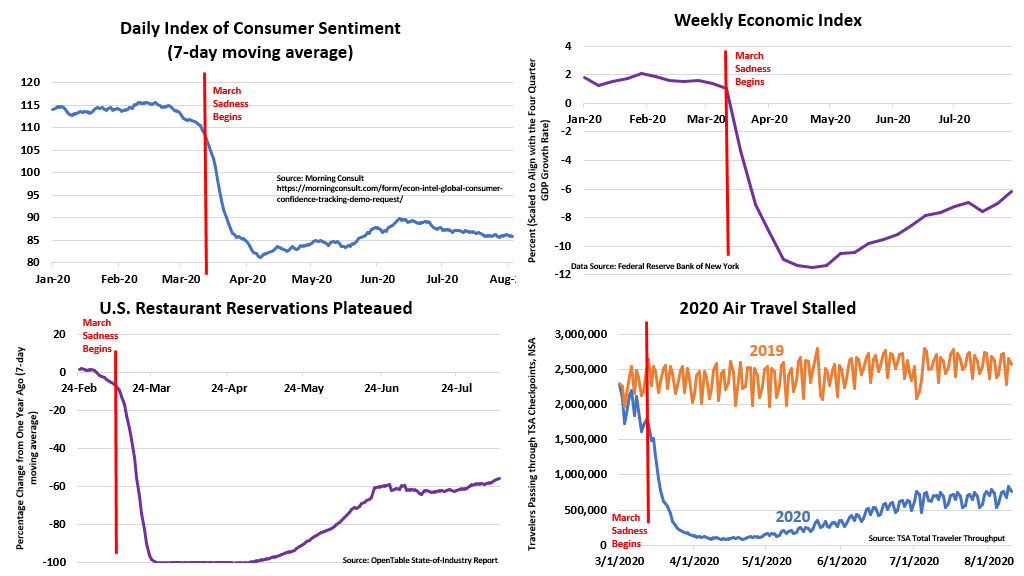 All these “lessons learned” highlight the importance of the consumer in helping to detect turning points in economic growth. Consumer spending accounts for nearly 70% of U.S. GDP. Consumer confidence is key to understanding expectations that may drive growth. And consumer behavior (and confidence and spending) can change quickly, especially when uncertainty escalates.

Originally Recorded in October 2019. As we enter the quiet summer months, Simply Stated is re-broadcasting the "greatest hits" of the podcast. Look out for more content in August and beyond.

Fintech continues to be a hot-button issue for regulators, industry and policymakers. All of us want to know what the future holds, but few of us really know the answers. What we do know is that technology is powering more financial transactions, enabling new business models, and even propelling new regulatory initiatives.

On this episode of Simply Stated, we check in with a CSBS expert to understand how state regulators are preparing to supervise the next generation fintech companies.