"I learned that courage was not the absence of fear, but the triumph over it. The brave man is not he who does not feel afraid, but he who conquers that fear."
Nelson Mandela, inaugurated as President of South Africa this day in 1994

FDIC Regulation Can Cause a Liquidity Crunch for Smaller Banks

In a comment letter sent this week to the FDIC, CSBS suggested changes to the regulatory treatment of brokered deposits and deposit interest cap methodology.

Brokered deposits can be a source of supplemental funding for banks in rural areas or markets that lack local deposits to meet community needs and are a critical credit to agriculture customers and small businesses. However, the FDIC has generally viewed brokered deposit waivers as increasing the risk to the Deposit Insurance Fund.

State regulators have long been concerned that the current supervisory approach can cause a liquidity crunch for already struggling banks. If a bank falls under the prompt corrective action (PCA) framework, it is immediately prohibited from renewing or issuing brokered deposits. This creates an unnecessary strain on liquidity, destabilizes the institution and increases the risk to the Deposit insurance Fund.

If a bank triggers PCA by falling below “well capitalized,” state regulators recommend it should be able to reduce its brokered deposits over time. Rather than increasing the risk to the deposit insurance fund, a more gradual approach lowers the risk by placing the bank on a “glide path” for easing their dependence on brokered deposits. CSBS recommends that banks be allowed to develop a plan to unwind their brokered deposit positions over 12 to 24 months, which would avoid a liquidity crunch as the bank works to enhance capital and reduce its risk profile.

The FDIC asked for feedback on its supervision of brokered deposits in an advanced notice of proposed rulemaking issued in December. 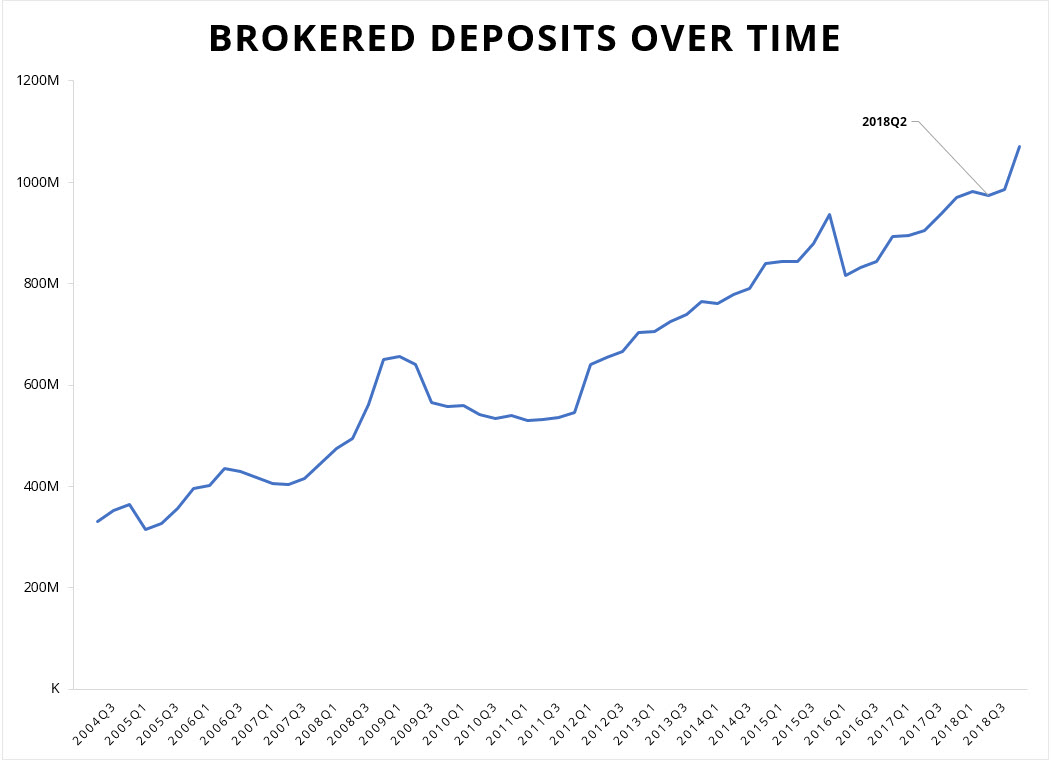 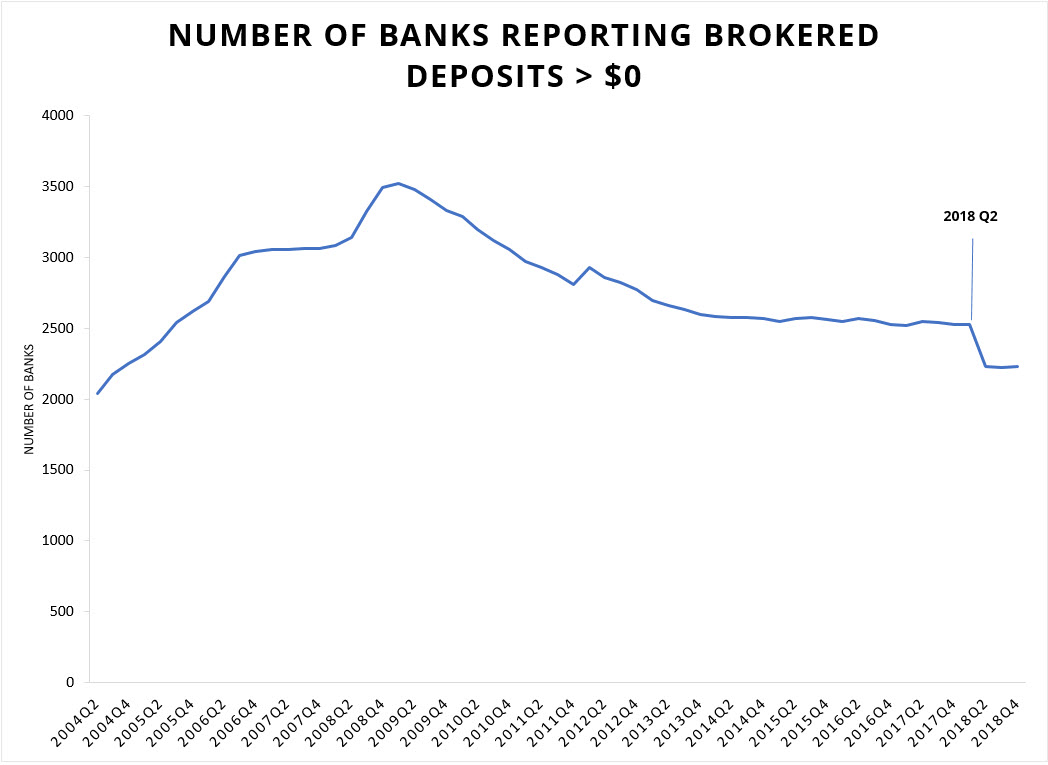 The COUNTER Act is Welcome Progress on BSA Reform

Thursday, the House Financial Services Committee approved unanimously a bill (H.R. 2514 or the COUNTER Act) to modernize and reform the Bank Secrecy Act (BSA).   CSBS applauds this effort to improve the Bank Secrecy Act’s effectiveness and to ensure the law can better and more efficiently achieve its purpose of combatting illicit finance.

The states are the single largest supervisor of institutions, both banks and non-banks, subject to BSA/AML requirements. As the primary regulator of 4,283 depository institutions and over 500 non-depository money services businesses, state regulators are often the first point of contact for financial services providers and law enforcement on issues that arise related to BSA compliance.  In 2018, state-chartered banks filed 234,262 Suspicious Activity Reports (SARs). Over the same period, state-licensed money services businesses (MSBs) filed 873,203 SARs. Together, this amounts to more than half of the total number of SARs filed in 2018.

Earlier this week, CSBS sent a letter on the discussion draft of the COUNTER Act.  A few key points from our letter and about the bill the Committee just approved:

We look forward to working with the Committee to advance this important proposal.

CSBS has begun the annual process of surveying community banks on their economic condition, regulatory impacts and business plan. We encourage banks to participate in the survey, which can be accessed here.

This is the sixth year of the CSBS National Survey of Community Banks. It canvasses hundreds of community banks across the country, providing truly a unique opportunity for them to have their voices heard. The data from these surveys provides a rich tableau of the challenges and opportunities these institutions face and is useful information for both policymakers and researchers.

The survey also helps us monitor the constant change community banks experience year after year. Last year we reported that after years of increasing costs, compliance costs for community banks actually declined by 13%.

But the National Survey is more than accumulating quantitative data. It also provides us with qualitative insight on the outlook of community banks and the economy.

This year, CSBS is pleased to introduce the creation of an ongoing sentiment index of community bankers in partnership with Temple University economists Dr. William Dunkelberg and Dr. Jonathan Scott. The index is intended to shine light on specific market conditions and how they impact prospects for growth and participation by community banks in their communities.

Ten short questions have been included towards the end of the National Survey. The answers to these questions about regulations, competition, economic conditions and market prospects will be combined to form an overall sentiment index of community bankers. Going forward, these questions will be circulated on a quarterly basis to better reflect changing sentiments.

Our goal is to get a more accurate understanding of how bankers are feeling about the future and to help provide an important barometer of the state of the industry. We encourage bankers to complete the survey given its potential influence as an economic barometer.

The National Survey went live on April 15 and closes on June 30. We look forward to seeing where the community banking industry stands in 2019.

And Then There Were Six

Six student teams this week advanced to finals in the 2019 CSBS Community Bank Case Study Competition, emerging from the second round of 15 teams.

A total of 58 student teams representing 44 colleges and universities entered this year’s competition, which examines how the Economic Growth, Regulatory Relief and Consumer Protection Act has helped community banks foster economic growth. In previous years, only five teams have moved to the final round.

“The competition has been fierce this year, and it was hard to limit the finals to six teams,” said CSBS Senior Executive Vice President Michael L. Stevens. “We are thrilled by the quality of work they have produced. It is going to be an intense final round.”

The student teams compete for an academic scholarship, a chance to get their work published in an academic journal and an opportunity to attend the sixth annual CSBS-Federal Reserve Community Banking Research Conference, held in St. Louis in October.

This is the fifth year of the competition, which is open to undergraduate students in all fields of study as an opportunity to gain valuable first-hand knowledge of the banking industry.

The top three scoring student teams from the final round of judging will be announced on May 23 during the CSBS State-Federal Supervisors Symposium in San Antonio. The announcement will be streamed live on our Twitter feed (@CSBSNews).