What Goes Up, Must Come Down?

Examining the Relationship Between Consumer Confidence and the Unemployment Rate

Legend has it that Sir Isaac Newton discovered gravity when he saw an apple fall from a tree while contemplating the forces of nature. Even though the economy is not always governed by natural forces, the relationship between consumer confidence and the unemployment rate seems to follow Newton’s observation that when one indicator goes up, the other indicator must come down. 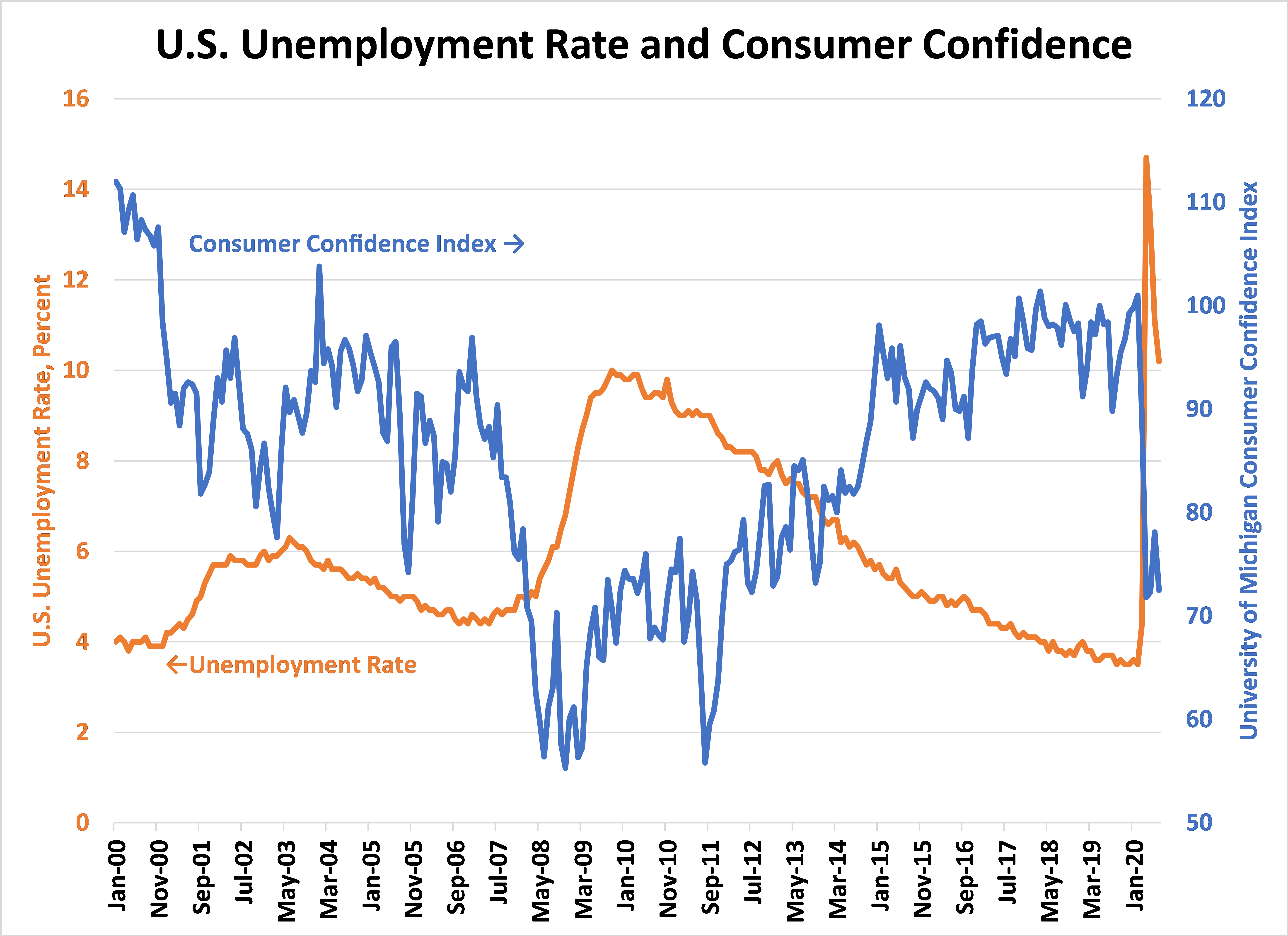 In mid-March 2020, as COVID-19 rapidly spread around the world and became a global pandemic, the subsequent nationwide economic shock from the business and government lockdown resulted in an unprecedented loss of jobs and a freefall in consumer confidence. The chart below shows that at the beginning of 2020, consumer confidence was high and hovering near 100, and the unemployment rate was at a historic low of about 3.5%. But during March and April, as the economic impact of the lockdown became more severe and more evident, the national unemployment rate skyrocketed to a post-Great Recession high of nearly 15% and confidence plummeted, with the University of Michigan Consumer Confidence Index falling by about 30 points. 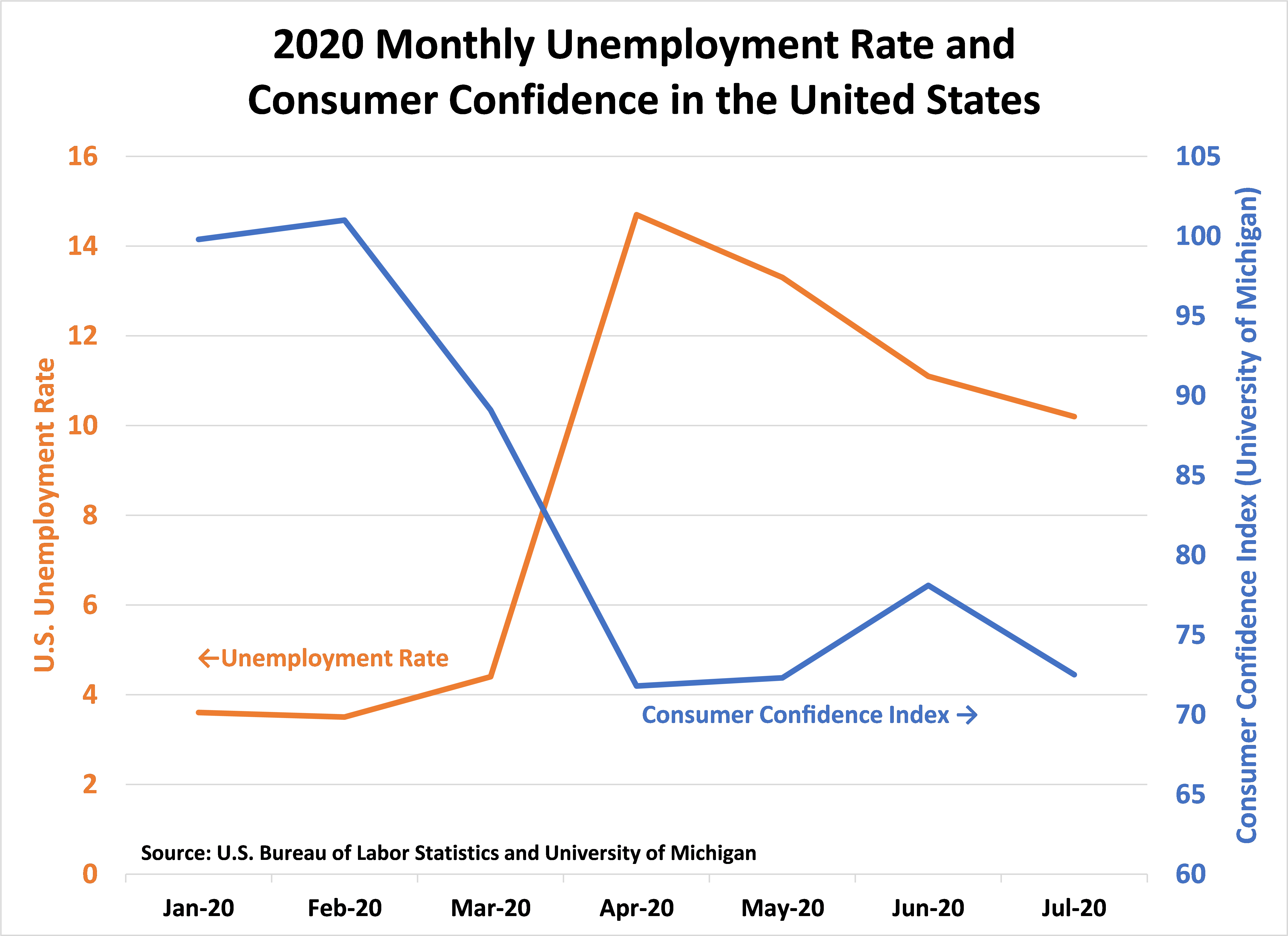 The recent negative correlation between consumer confidence and the unemployment rate has been consistent across the 50 states, as shown in the nearby charts, although the severity of the swings in each indicator varies. (The colors used in both maps highlight the states in the five CSBS Districts.) With an unemployment rate increase of 26.5 percentage points, Nevada experienced the largest two-month (February to April 2020) change. Hawaii and Michigan were the other states to experience an increase in their state’s unemployment rate of more than 20 percentage points. In all, 27 states experienced a double-digit increase in their state unemployment rate over these two months. At the same time, consumer confidence worsened across the individual states, plummeting between 25-35 points from February to April in 45 of the 50 states. 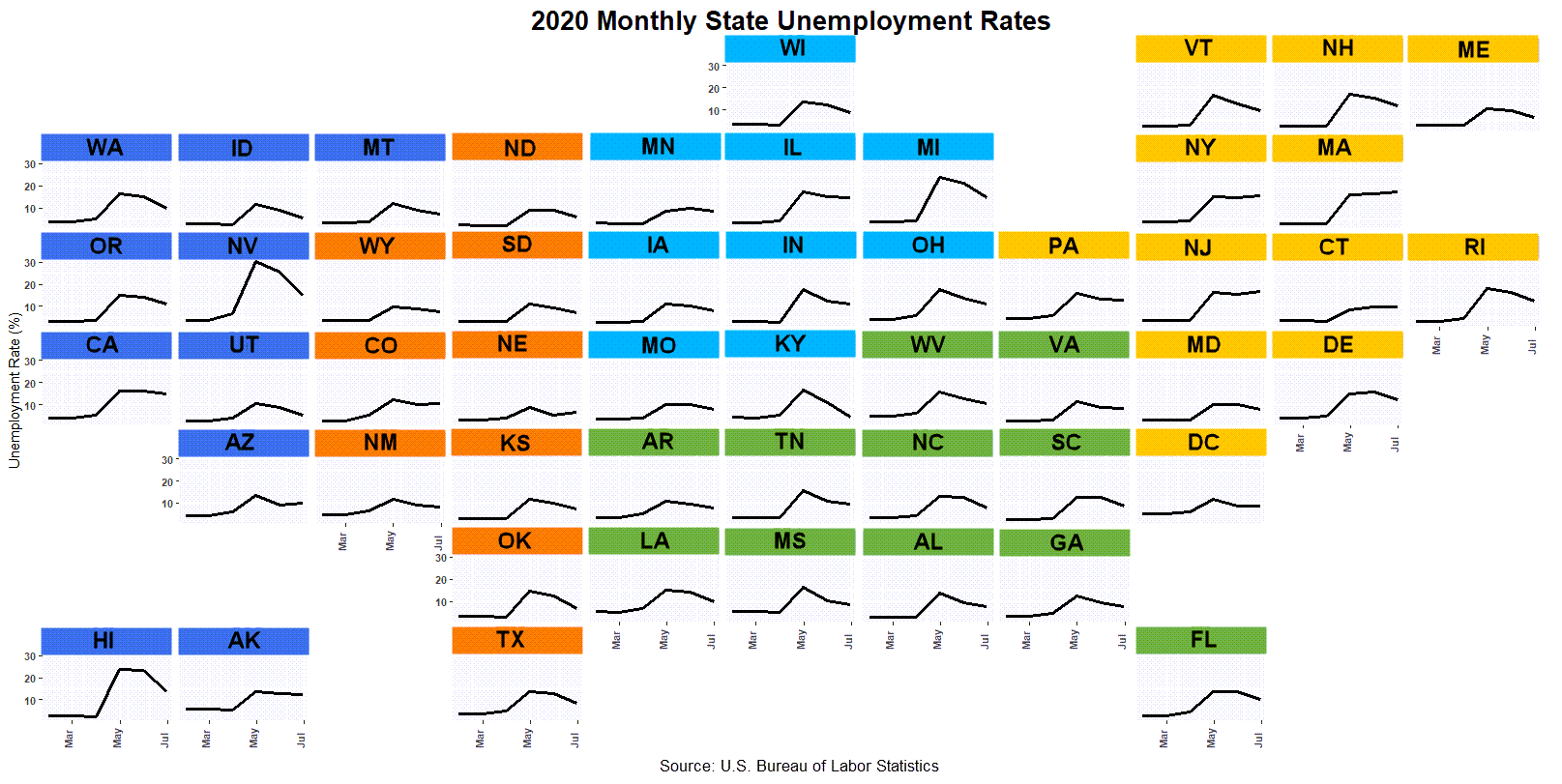 The overall negative correlation between the two series is shown by the downward sloping curve. Both the unemployment rate and consumer confidence readings are from the middle of each month. The first three months of data (January through March) are shown in blue to highlight the period mainly before the pandemic and lockdown. The last four months are displayed in orange (April through July) to emphasize the overall downward shift in confidence and increase in unemployment rates following the mid-March pandemic/lockdown. 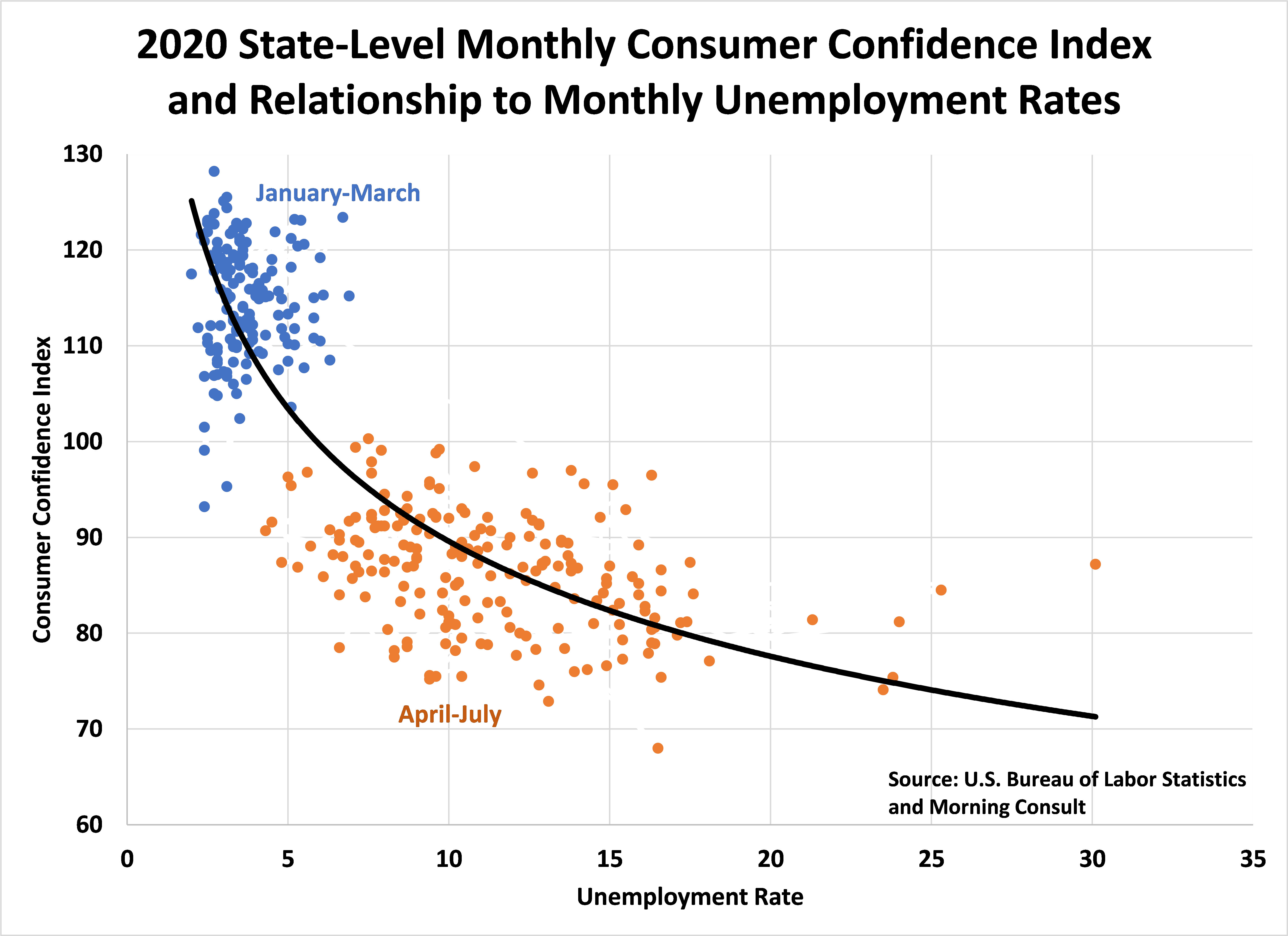 Obviously, for the individual state economies and the overall U.S. economy to regain the momentum experienced at the beginning of the year, consumer confidence needs to rise, and unemployment rates need to decline further. And that can happen only when fears and concerns about the COVID-19 pandemic diminish to the point where consumers are more comfortable gathering in larger groups and travelling longer distances and actively engaging with one another.

Recently, Moody’s Analytics and CNN Business partnered to create a “Back-to-Normal” Index that is comprised of 27 national and seven state-level high-frequency indicators. As shown in the chart below, their Back-to-Normal Index for the U.S. economy currently stands at 80, where 100 is the pre-pandemic conditions experienced at the end of February 2020. After plunging to a nadir of 59 in mid-April, the index began to bounce back, although there has been a noticeable shift in the rate of increase since mid-June when the reported growing number of COVID-19 cases gave way to fears that some state and local economies might be reopening too quickly. During these times, fear and uncertainty are the driving forces behind both consumer confidence and business hiring/rehiring decisions. 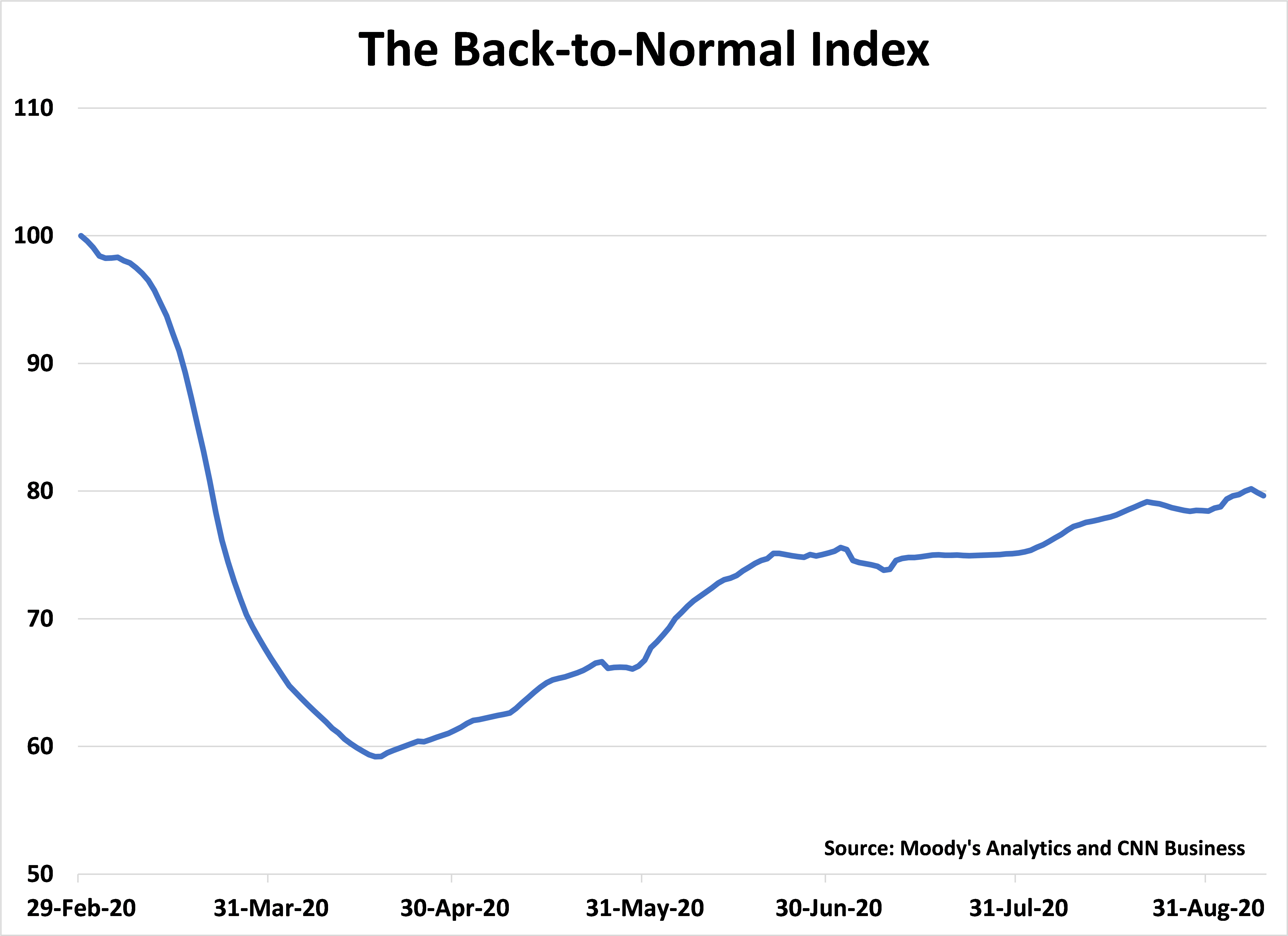 For the individual states, the Back-to-Normal Indices are shown in the nearby chart. While 33 states have Back-to-Normal Index values above 80, only Maine is above 90, at 93. Hawaii is having the greatest difficultly getting back to normal, with its most recent index reading at 57.

Consumer confidence indices and unemployment rates are important indicators in helping us gauge when economic growth might resume at traditional rates. The speed of the recovery will depend primarily on the overall sense of fear and uncertainty about the virus, new consumer behaviors, and monetary and fiscal policies designed to sustain growth.

My thanks to Jake Vick, data analyst on the CSBS Data Analytics and Research Team, for his help in preparing the data and charts.