CSBS launched Vision 2020 in 2017 to harmonize the multistate licensing and supervisory experience for nonbank financial companies, including fintechs. Much of the work under Vision 2020 has been informed by the Fintech Industry Advisory Panel, a group of fintech companies we convened as part of the initiative. The panel devoted more than 100 hours to meetings that identified and prioritized the challenges facing state-licensed fintechs. In February 2019, CSBS announced that it had accepted many of the panel’s recommendations, including those in the areas of creating common definitions and practices, increasing transparency and expanding the use of common technology among all state regulators.

CSBS released periodic accountability reports as the FIAP recommendations were implemented to ensure transparency. This report is a final readout on the Vision 2020 initiative, summarizing the commitments that have been completed and those that will continue as we work to create a more integrated and empowered state system.

State regulators are fulfilling their commitments, including:

While each of the commitments has value, those that encourage seamless regulation across state lines have been the most impactful for industry and regulators. For example, MSBs are experiencing a quicker licensing process as states adopt the Multistate MSB Licensing Agreement (MMLA), and as of January 2021, multistate MSBs will have fewer exams under the One Company, One Exam program. For state regulators, these MSB initiatives mean less time navigating multistate differences and more time for risk analysis and consumer protection.

Financial regulation must continue to evolve and strengthen with the changing financial services landscape. An integrated and empowered state system is critical for meeting both current and future regulatory challenges.

To that end, states are working through CSBS to create a regulatory network empowered by technology platforms and the collective intelligence of its users – a strategic approach that we call Networked Supervision. This “networked” system will increase efficiency, reduce regulatory burden and protect consumers more effectively.

Initiatives like the MMLA and One Company, One Exam, are part of this broader focus and have laid the groundwork for even more integration. For example, both initiatives will be built into the modernized Nationwide Multistate Licensing System (NMLS) and inform the more data-driven and risk-scoped regulatory experience. In addition, the multistate examination concepts of One Company, One Exam are now being applied to a pilot program for mortgage companies.

State regulators have made considerable progress in harmonizing the multistate licensing and supervisory experience for nonbank financial companies. Industry input through the FIAP was critical to this success. Going forward, both industry and regulators can expect further streamlining under Networked Supervision.

CSBS thanks the FIAP and all our stakeholders for feedback and support of Vision 2020 and for collaboration in the years to come as we build the regulatory system of the future. 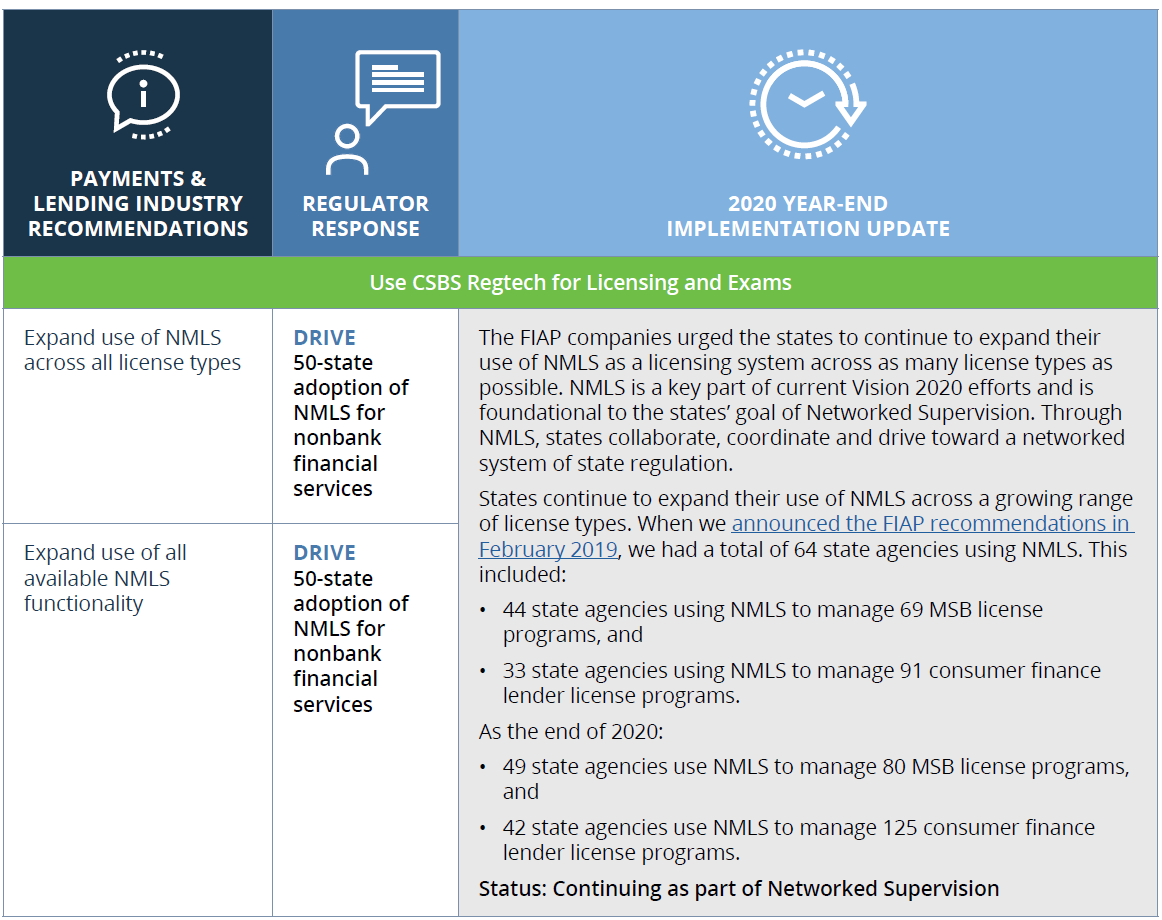 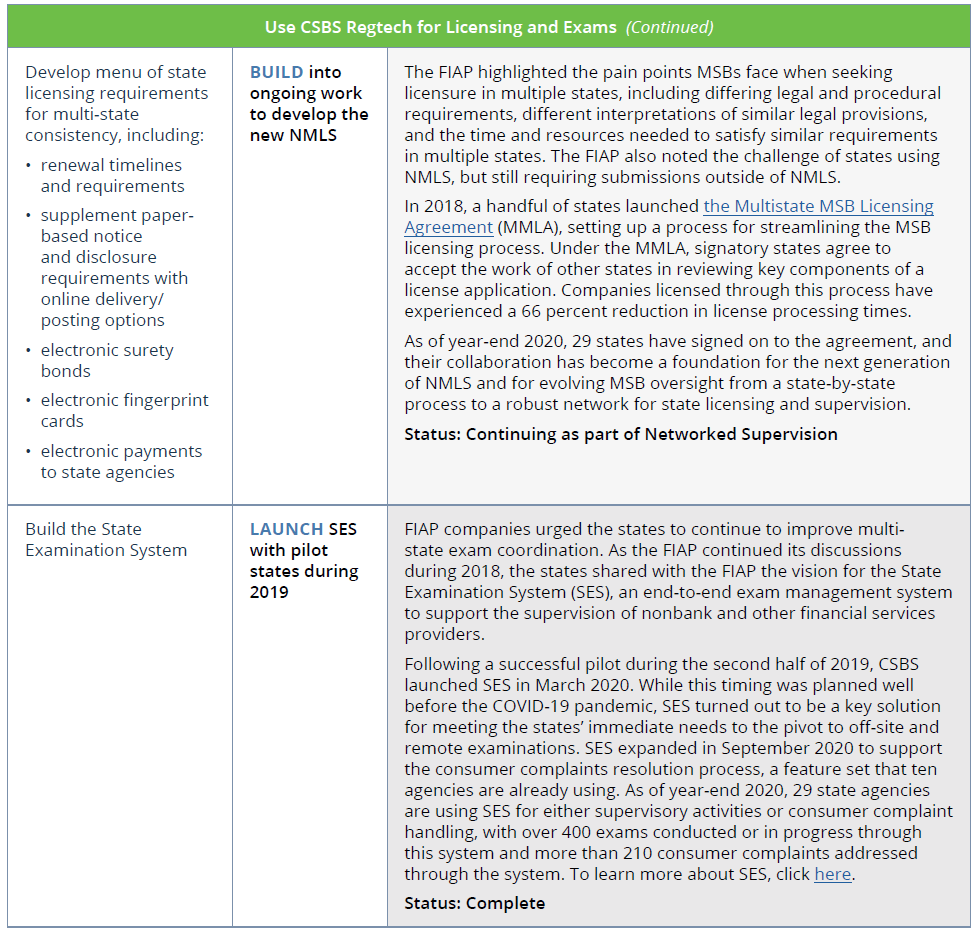 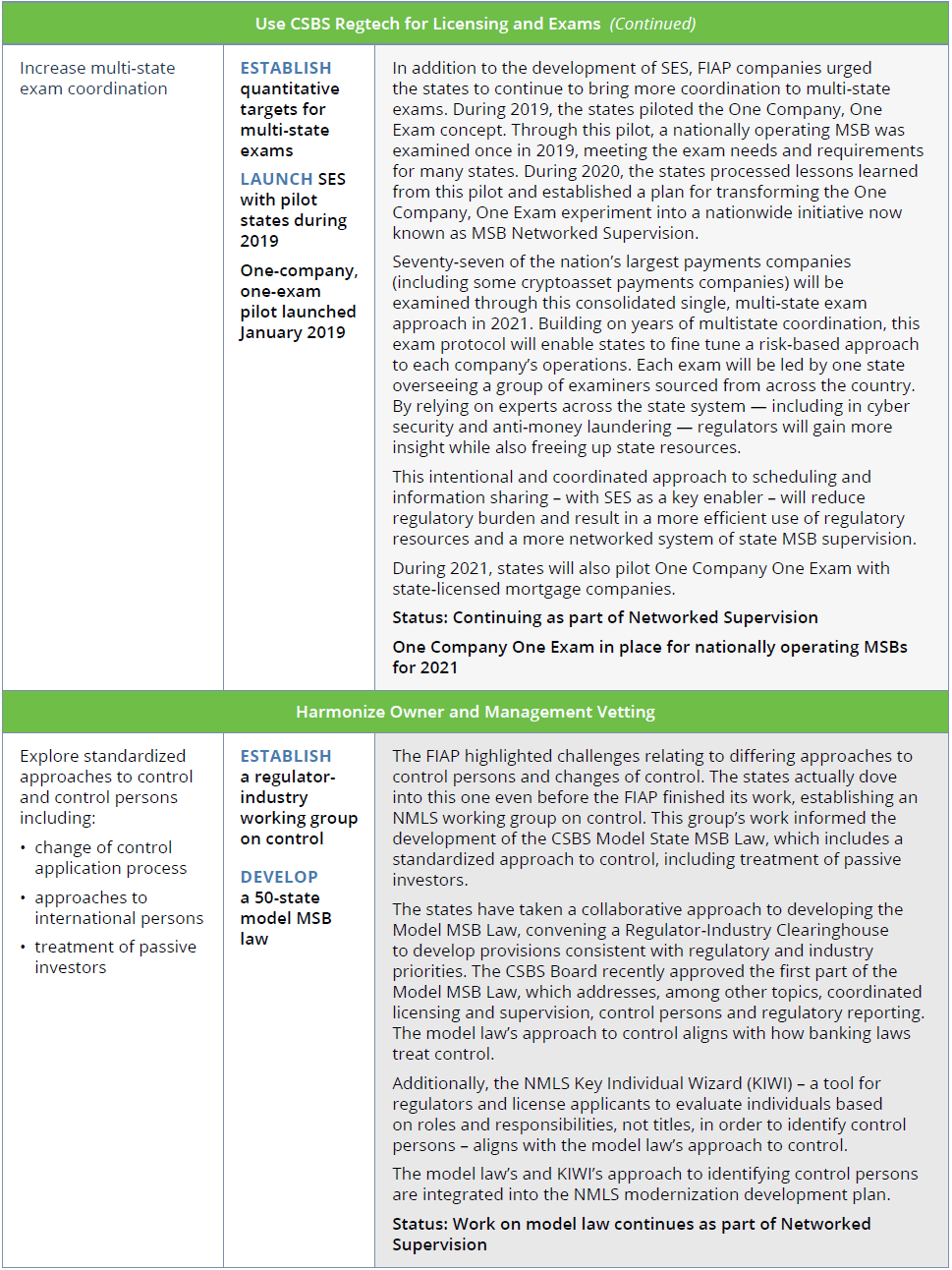 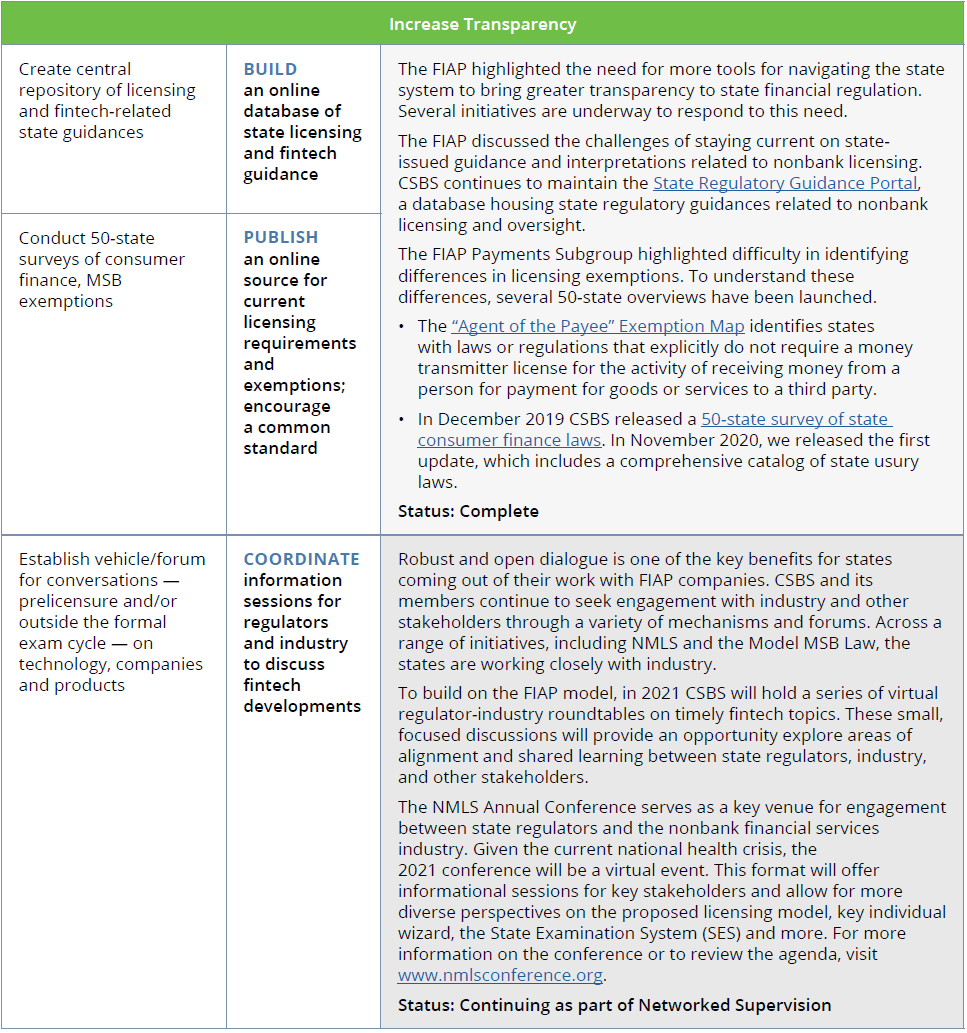 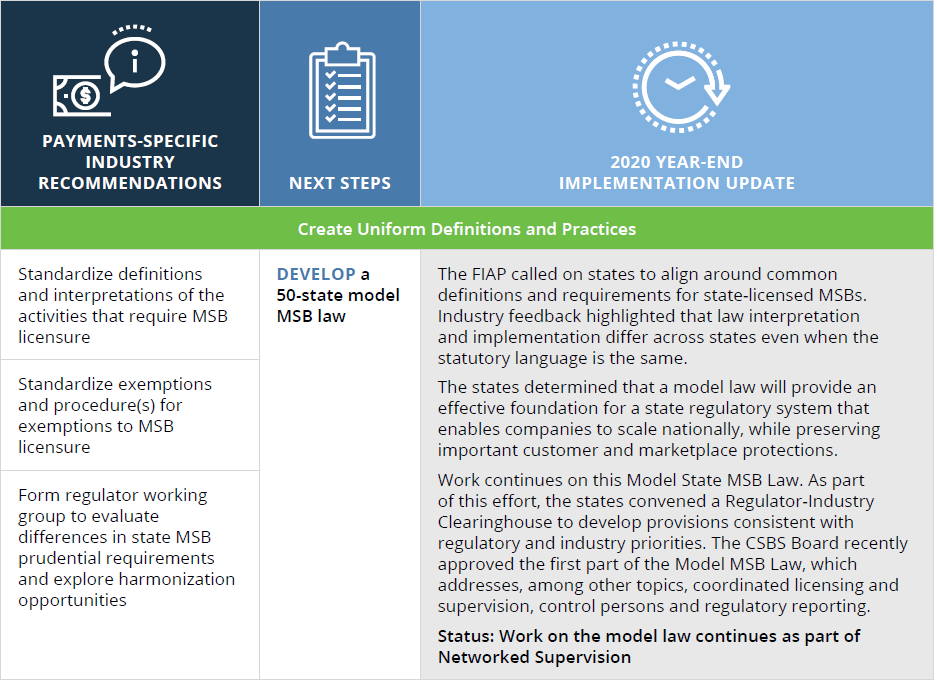 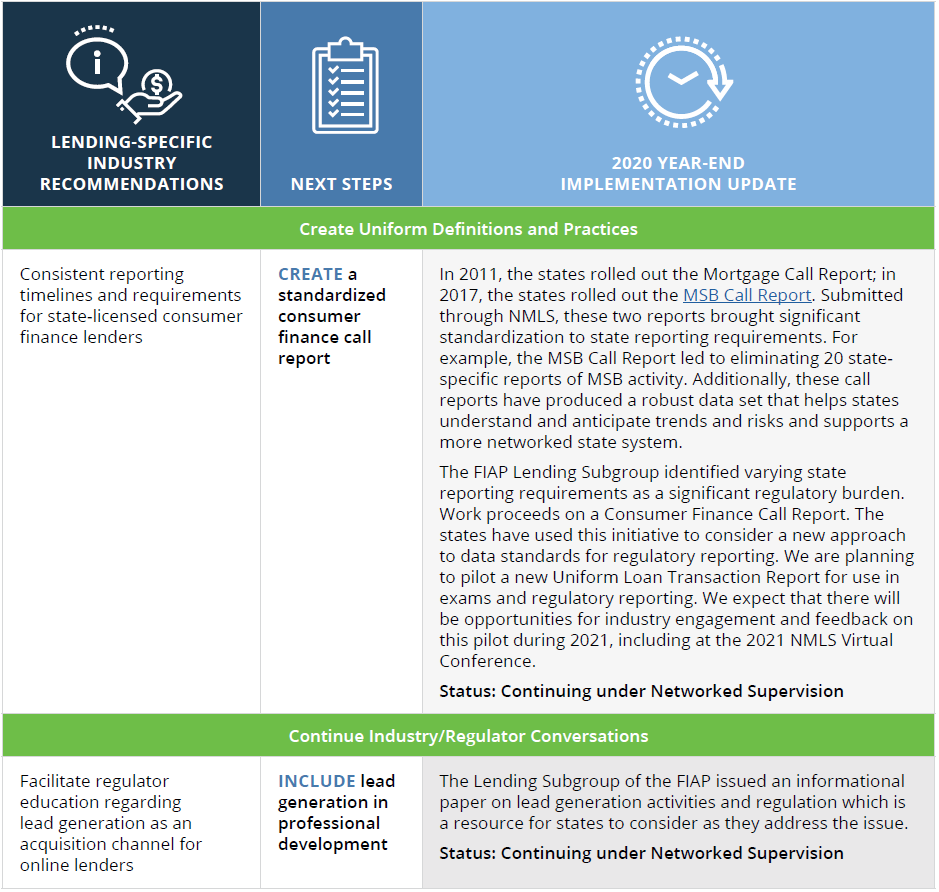