Because of their local knowledge and expertise, federal law mandates that state regulators are represented at the highest levels in federal banking agencies.

The U.S. financial regulatory structure did not come about by accident – its current state reflects a process that has repeatedly placed a value on multiple regulatory perspectives and sought to avoid an excessive consolidation of regulatory power.

This regulatory diversity encourages a more dynamic financial services marketplace, encourages collaboration between regulatory agencies, and gives states a voice in the supervision of their chartered and licensed entities. 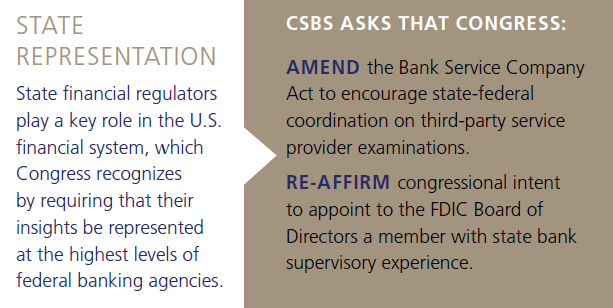 The FDIC and Federal Reserve Board of Governors

Because the Federal Deposit Insurance Corporation (FDIC) and the Board of Governors of the Federal Reserve System share supervisory responsibility for nearly 4,800 state-chartered banks with state financial regulators, it is critical these two federal regulatory agencies have leadership that understands the important role of state supervision and the vital role community banks play in local economic development.

CSBS made significant strides in 2015 to ensure state representation on the FDIC Board and the Federal Reserve Board of Governors.  Because of state regulators’ efforts, Congress introduced and signed into law in 2015 a provision requiring at least one Federal Reserve Governor have “demonstrated primary experience working in or supervising community banks.”

State regulators also support legislation clarifying the language of the Federal Deposit Insurance (FDI) Act to ensure the FDIC Board of Directors include an individual who has state bank supervisory experience. While language already exists requiring the FDIC to appoint such an individual, state regulators encourage Congress to make explicit its intent to have a state bank regulator on the FDIC Board of Directors.

CSBS plays an instrumental role in the states’ representation on the Federal Financial Institutions Examination Council (FFIEC). State regulators are represented on the FFIEC through the State Liaison Committee (SLC). The Chair of the SLC is a voting member of the FFIEC.

The FFIEC’s role in shaping the regulatory process of our nation’s banking system is improved by the inclusion of state regulators, and CSBS provides staff support for states’ participation.

State representatives often bring local and practical experience to their respective FFIEC roles. This input helps to formulate the final outcome, whether it be new regulatory guidance or a new examination process, in a way that recognizes and respects the diversity of financial institutions across the country.

Established by the Dodd-Frank Wall Street Reform and Consumer Protection Act, the Financial Stability Oversight Council (FSOC) is a body of regulators that collectively monitors and responds to financial stability threats. FSOC is chaired by the Secretary of the Treasury, and its membership consists of state and federal regulators with oversight of banking, insurance, and capital markets.

Since the formation of FSOC, a state banking regulator has served as a non-voting member of the Council.

Policy
Bank Service Company Examination Coordination (BSCA) Act
The BSCA, a bill introduced in the 114th Congress, is commonsense, bipartisan legislation that makes state and federal supervision more efficient and more effective.
learn more
Oct 9, 2019
Policy
Research Paper: Community Banks and Technology
Technology and banking share a long history. The rapid growth over the past 20 years in adoption of technology for front and back office operations in banks of all sizes is well documented.
learn more
Dec 7, 2018
Policy
Bank Exam Fees are a Tax on Banks and Their Local Communities
A current proposal by Congress threatens to upend the supervision of community banks, increasing costs of doing business and harming the dual-banking system.
learn more
Aug 1, 2018
Policy
Community Banks Play a Critical Role in Providing Credit
Community banks play a critical role in providing credit and banking services to all corners of the U.S., especially small towns and rural areas where community banks are likely to be the only banking options.
learn more
Oct 30, 2017