Community banks play a critical role in providing credit and banking services to all corners of the U.S., especially small towns and rural areas where community banks are likely to be the only banking options. 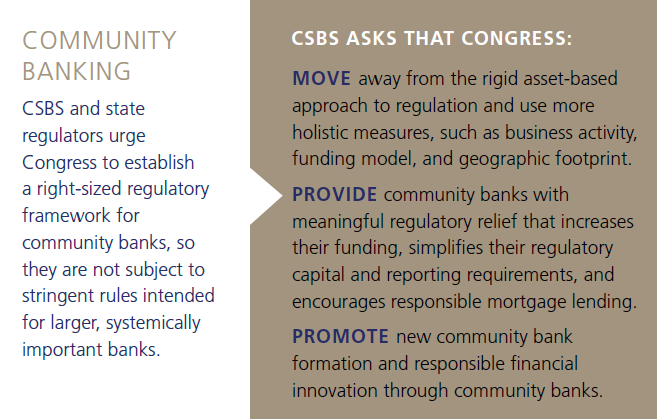 In fact, community banks enhance the chances for survival of start-up companies, and by extension, the higher rates of employment growth and job creation that are indicative of newer firms.

One key characteristic of community banks that make them so valuable to local communities, and so different from larger banks, is the community bank relationship-business model. Community banks serve local economies by tailoring their loans and financial services around the customers within their geographically limited markets. Conversely, the largest banks leverage economies of scale and the law of numbers in order to offer standardized mortgage and consumer products across a diversity of U.S. and global markets.

Policy
Bank Service Company Examination Coordination (BSCA) Act
The BSCA, a bill introduced in the 114th Congress, is commonsense, bipartisan legislation that makes state and federal supervision more efficient and more effective.
learn more
Oct 9, 2019
Policy
Research Paper: Community Banks and Technology
Technology and banking share a long history. The rapid growth over the past 20 years in adoption of technology for front and back office operations in banks of all sizes is well documented.
learn more
Dec 7, 2018
Policy
Bank Exam Fees are a Tax on Banks and Their Local Communities
A current proposal by Congress threatens to upend the supervision of community banks, increasing costs of doing business and harming the dual-banking system.
learn more
Aug 1, 2018
Policy
State Representation in Federal Agencies
Because of their local knowledge and expertise, federal law mandates that state regulators are represented at the highest levels in federal banking agencies.
learn more
Oct 30, 2017