The final quarter of 2016 closed out with an underscoring of trends that were discussed throughout the year. Chief among these trends is a persistent loosening of underwriting standards and generally more accommodative credit administration practices across most lending segments and geographies. Agricultural regions, however, no longer seem to be following this trend, with such areas more commonly tightening credit standards. Investment decisions appear to be considering the likelihood of rising rates, with more new bond purchases observed to be at shorter maturities than the existing portfolio.  Finally, it seems the consistent interest in, and demand for, out-of-territory loans has begun to wane, with examiners in certain regions noting reduced demand.

More focus continues to be placed on banks’ liquidity positions, likely as a result of several consecutive quarters of loan growth and stagnant deposit growth. However, instances of liquidity stress are uncommon, as most institutions maintain strong positions. Heightened focus is warranted most often at institutions where loan growth is particularly strong and use of non-core funding sources is rising. In discussions, examiners pointed out that the prolonged period of low loan demand and stable deposit rates may have led to complacency with regard to liquidity monitoring and testing of contingency funding sources. Now that loan demand is increasing, it may be a good time to reevaluate funding sources and ensure that existing sources remain viable going forward. The tightening liquidity positions are evident in public data. According to the FDIC’s Quarterly Banking Profile, net loans and leases as a percent of total deposits reached 79.1 percent in the fourth quarter of 2016 for banks less than $1 billion. This ratio is off slightly from a high last quarter of 79.4 percent, which was the highest reading for this group of banks since December 31, 2009.

Readers of this series will recall past editions discussing credit conditions in the agricultural sector. In 2016, CSBS released a Spotlight  on the topic, which discussed the trend of increasing levels of carryover debt. These trends stoked fears of widespread delinquencies, however, the end of season numbers came in somewhat more favorably than expected. Generally high yields helped to partially offset the low commodity prices, particularly in the corn and soybean markets of the Midwest. Despite the high yields, producers in many parts of the country’s agricultural regions are experiencing tight cash flows given persistently high input costs and expenses associated with machinery and equipment purchases made in years prior. Examiners from these regions note that while some of the difficulties in 2016 were mitigated by higher-than-expected yields, there remains substantial risk on many farm balance sheets. Forecasts for 2017 suggest that the year will be a difficult one for many farm operations, particularly those with high debt loads.

In a handful of cases, examiners from these areas found that credit rating practices are not always reflective of the apparent risk in the agricultural loan portfolio. As credit risks and delinquencies have risen, examiners have found more frequent instances where examiners’ ratings differ from those assigned by bank management. This was noted in the third quarter and was repeated this quarter.

Concentrations of credit are a key consideration in any examination. Concentrations of commercial real estate have begun to reemerge, especially in coastal geographic markets and large metropolitan areas. Examiners from those areas have consistently reported that banks’ loan growth efforts have increasingly shifted toward commercial real estate development, with some pointing out that growth in the acquisition, development, construction (ADC) segment has been strong.

It is important to note the regional nature of these observations. Figure 1 illustrates the states where the top credit category sought by banks was commercial real estate or ADC, according to Risk ID Team members in the fourth quarter. The map illustrates in which states commercial and industrial loan growth is highest, as well as in which states both categories topped the list. 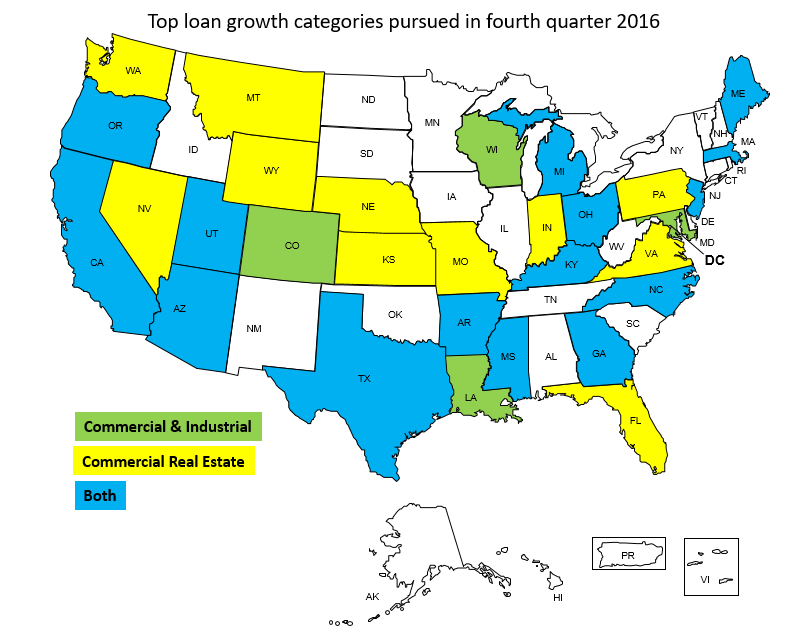 Increasingly concentrated positions are not limited to commercial real estate or development loans. Concentrations of commercial and industrial loans—a broad category that includes working capital and other production-related debt—continue to rise. As figure 1 shows, 22 percent of examiners report that banks in their area are aggressively pursuing this loan category. Examiners from District 2, in particular, have commented on the growth in this loan category.  Despite these reports, quarterly Call Report data suggests that growth in this segment may be tapering on a nationwide basis. As figure 3 shows, the fourth quarter of 2016 was the first to exhibit negative growth in the segment. 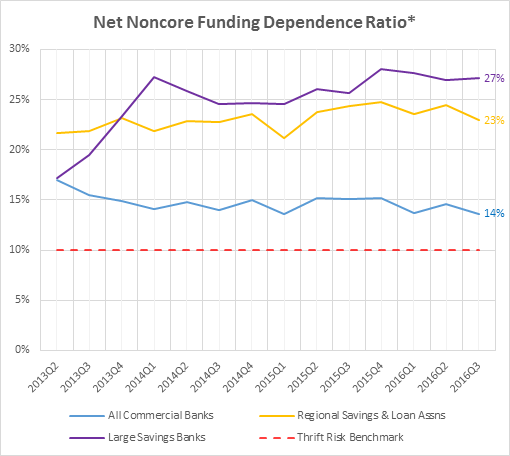 The prevailing trend of slackening underwriting standards and accommodative loan terms has continued through the fourth quarter in a similar manner to prior quarters. 35 percent of examiners reported that banks in their region continue to loosen underwriting and credit origination standards. Notably, examiners from District 4 reported differently, especially in areas affected by stress in the agricultural sector. In those areas, it seems, banks are less likely to aggressively seek loan growth, perhaps resisting out-of-territory loans as a supplement for weaker borrower conditions locally.  Figure 4 shows how two metrics, underwriting standards and lending practices, have trended over time. These two related concepts track closely. Responses of Loosened somewhat and become more accommodative have been on a modest upward trend for the past several quarters, as is shown in Figure 4. However, between the third quarter and year end, the trend reversed, with fewer examiners reporting such loosening or accommodation. It is unclear whether this reversal will continue into 2017, but indications are that credit demand and competition remain high—factors that often lead to increasing reports of loosening underwriting or accommodative lending practices. 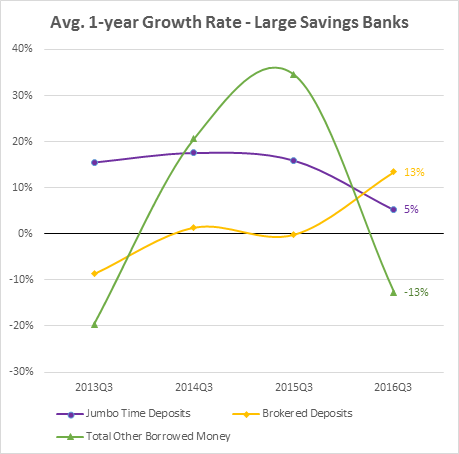 The loosening of underwriting standards and more accommodative lending practices has led to findings of inadequate credit risk management practices. In the fourth quarter, 13 percent of examiners responded that credit risk management practices were beginning to show signs of weakness, and in a few cases, cited that they were in need of improvement. This represents a shift from past quarters, where it was uncommon for examiners to report any such deficiencies.  Of particular note this quarter is the reemergence of long amortization and interest-only loans for construction projects. In a few instances, examiners reported seeing interest-only features on development credits, a practice that was somewhat commonplace prior to the financial crisis. The heightened risks and monitoring requirements associated with interest-only products resulted in their extinction in the crisis and years immediately following it. Now, however, it seems that the product is beginning to return in highly competitive markets and those experiencing rapid real estate development growth.

In these surveys, examiners are asked about new lending products or new markets that their banks have entered. Over the course of the quarter, examiners have encountered a handful of loan types in banks where such types of lending were not found previously. These included new entrants into the indirect auto lending market, more banks forming relationships with non-bank lenders such as online and marketplace lenders, and cannabis production lending in states where medical or recreational marijuana has recently become legal at the state level.

About this Report and the CSBS Risk ID Team

Each quarter, members of the CSBS Risk Identification Team complete a standardized survey that collect observations on current risks, developing trends, and different aspects of the supervisory process. For comparison purposes, survey results are compared to prior quarters across CSBS districts. Further, throughout the quarter, team members raise issues and discuss observations that might not be collected by the survey. The results of all these activities are summarized in this report, and a particular risk often is the subject of a separate, periodic Risk Spotlight. 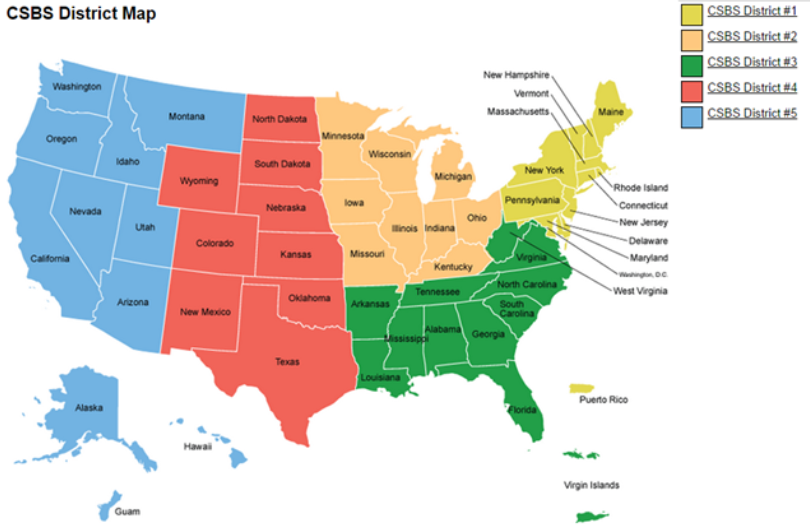 The CSBS Risk ID Team was created to leverage knowledge and skillset of state bank examination staff nationwide. The team has grown to more than 100 examiners, representing nearly every state banking department. The team is led by an Advisory Group, a subset of team members chaired by Lise Kruse, chief examiner of the North Dakota Department of Financial Institutions. Team findings are summarized in this report and provide a window into how state bank examiners see the risk environment affecting state banking institutions. The report also can be used to inform the policymaking, regulatory and supervision functions of state agencies and CSBS.