The CSBS fourth quarter 2021 Community Bank Sentiment Index (CBSI) indicates that community bankers are slightly more optimistic than they were in the previous quarter, but expectations on future profitability have fallen to the lowest level recorded since the survey’s inception in 2019.

Similar to the previous three 2021 quarterly CBSI surveys, over the next year community bankers continue to expect better business conditions, higher capital spending plans, expanded operations and market presence and greater franchise values. They also continue to be very concerned that the regulatory environment will become more heavy-handed and that the Federal Reserve’s monetary policy decisions could negatively impact their market outlook. Just one of the seven indicators―expectations on future profitability―started the year with some optimism and has ended in pessimism.

As shown by the line in Chart 1, the headline number from the fourth quarter 2021 CBSI was 101. With a value of 100 considered neutral, at the end of 2021 community bankers were just slightly more optimistic than they were in the third quarter 2021 (CBSI=100, up one point) and compared to one year ago (CBSI=98, up three points). 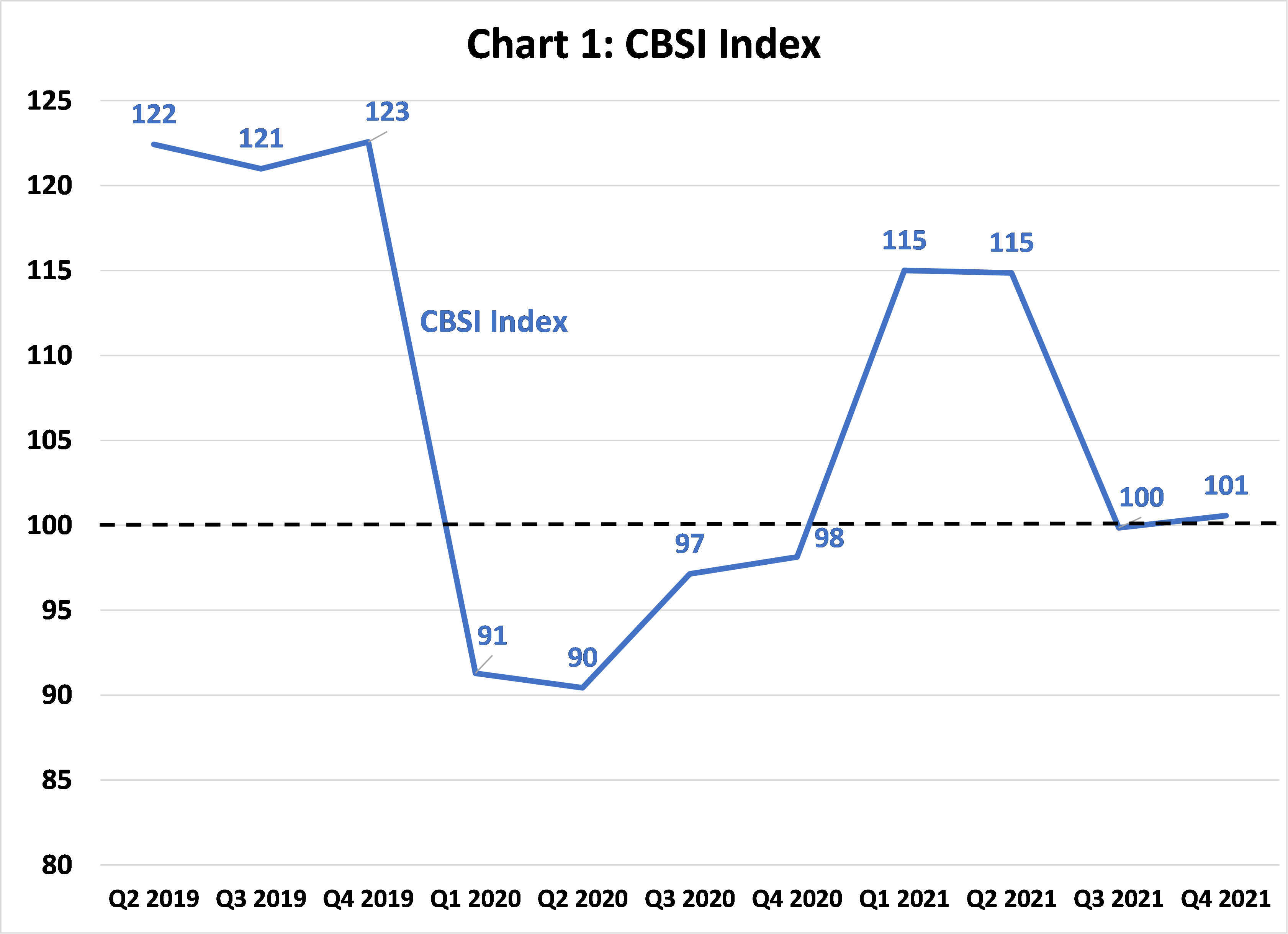 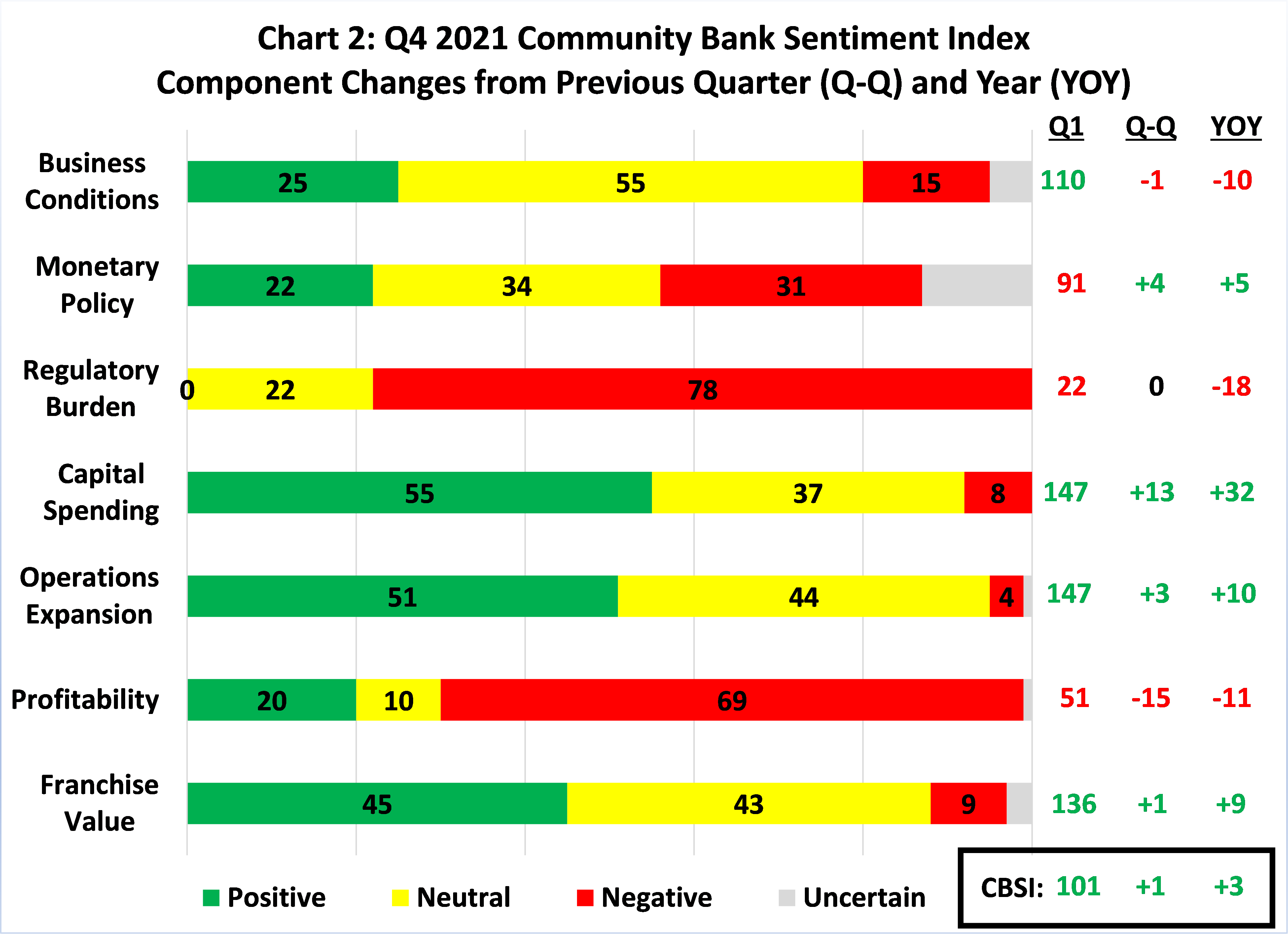 Chart 2 also displays the percentage of positive (green bars), neutral (yellow), negative (red), and “I don’t know” (grey) responses to the seven factors that comprise the index. Using the interactive dashboard on the CBSI, I took a deeper dive into the survey responses to examine the sentiment by how each group of respondents answered any specific question.

While these disparate results appear to tell contradictory stories, there are likely some plausible reasons why community bankers expect lower profitability and higher capital expenditures in the year ahead. Overall, 2021 turned out to be a pretty good year for community bank profits, and it is unlikely to be repeated this year. So, even though respondents indicated lower profitability expectations, that does not necessarily mean that they will suffer losses, but instead that profits in 2022 might not be as high as they experienced in 2021.

First, on the revenue side, community bankers earned a one-time income boost from the Small Business Administration’s Paycheck Protection Program (PPP) that will not repeat again without additional government funding. Second, additional stimulus funds made available to households and businesses through extraordinary fiscal policies and the expansion of the Federal Reserve’s balance sheet has increased bank deposits, squeezed net interest margins, and contributed to lower loan demand. Third, recent increases in inflation rates and expectations of higher future inflation can put downward pressure on banks’ ability to earn higher profits.

The conclusion may be that community bankers view 2021 as somewhat of an anomaly on the income side of the balance sheet, so that while profitability may be lower in the year-ahead, it is not an ongoing concern. Indeed, the CBSI survey also indicates that business conditions, at an index value of 110, will expand moderately in 2022, and that even the 69% of community bankers expecting lower profitability see business conditions improving slightly, at a level of 104.

So, community bankers’ plans to increase capital spending―despite their views on future profitability―may indicate that they truly value the long-run importance of furthering technological initiatives that improve efficiencies, expanding facilities and digital infrastructures to improve customer service and outreach, and providing better computer security to protect against cyberattacks, as well as the need to stay competitive and not get left behind.

Ultimately, this is good news for households and businesses that rely on their local community bank to help them navigate the current environment and help them with their financial decisions.