The headline number from CSBS’s fourth quarter 2020 Community Bank Sentiment Index (CBSI) is 98, a one-point increase from 97 in the previous quarterly survey and closer to the neutral reading of 100. While any upward movement in the index is encouraging, a deeper dive into the slight increase shows that components exhibiting positive sentiment continued to ascend whereas negative-sentiment indicators dropped further. The latest survey emphasizes that the greatest force behind rising community banker optimism is their outlook on future business conditions, and the greatest counterforce is rising concern that the regulatory burden will be heavier.

As shown in the nearby charts, the four index components that indicated positive sentiment (above 100) in the third quarter rose further in the fourth quarter. These components are business conditions (up 17 points to 120), capital spending (up 2 points to 115), operations expansion (up 4 points to 137), and franchise value (up 11 points to 127). However, three components that revealed negative sentiment in the third quarter drove the CBSI even lower in the fourth quarter: monetary policy (down 4 points to 86), regulatory burden (down 17 points to 40), and profitability (down 6 points to 62). 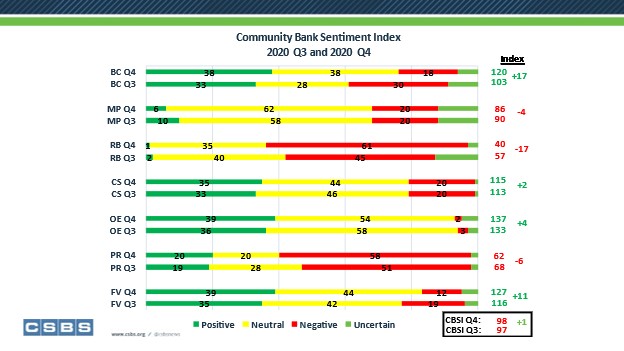 And alarmingly, the 18% of bankers who expect future business conditions to be worse have an overall CBSI of 61, with 69% expecting the regulatory burden to be harsher and 76% anticipating declining profitability. Even the 38% of bankers who expect no change in future business conditions are concerned about a heftier regulatory burden (63%) and declining profitability (61%). 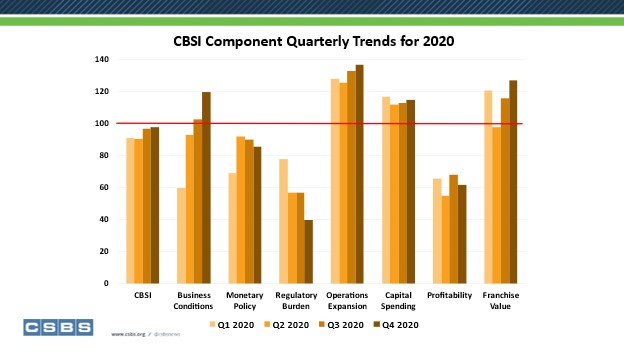 The main takeaway from the latest survey is that even as bankers expect business conditions to improve, rising profitability is not inevitable, and they are concerned about a weightier regulatory burden.