Retail lending refers to commercial real estate loans for malls, shopping centers and strip malls. A bank makes these loans to allow companies to finance acquisition, rehabilitation and development of retail centers, single-tenant retail properties and shopping malls. While there are several types of loans and distinct property types, this spotlight will focus on a higher-level view, noting the different types of retail and where they lie on the risk spectrum.

It is prudent for banks to keep an eye on retail lending and e-commerce growth. Concentrations naturally increase risk. As with any type of investing, diversification is important. That is why the Risk ID results are essential. Examiners should continue to monitor changing economic trends that could put those concentrations under stress.

Major e-commerce retailers such as Amazon and Alibaba have revolutionized commerce globally with online platforms that allow customers to purchase almost anything from their mobile device and have it delivered in two days or less. While some businesses are affected more than others by the growth of e-commerce, investment firm UBS estimates that 75,000 brick-and-mortar stores are likely to shut down by 2026 across the US. UBS also noted that the average U.S. household spent just over $5,000 online last year, a two-fold increase from five years prior. To date, closures have been largely a result of companies culling unproductive retail space to prioritize convenience over inventory and restructuring around their most profitable stores. The e-commerce trend does not affect all brick-and-mortar businesses, as many have continued to thrive. The United States historically has had more retail stores than many countries. Cowen analysts estimate that the United States has 23.5 square feet (sf) of retail for every American, compared to 16.4 sf in Canada, 4.6 sf in the United Kingdom. and 3.8 sf in France. Notably, in 2017, the Federal Reserve saw indications that banks were limiting their lending to retail CRE properties.

Consumer sentiment remains high and that bodes well for broader retail spending. There was $245 billion of growth in retail spending from 2016 to 2018, of which $127 billion was attributable to e-commerce. The remaining $118 billion of growth is attributed to the traditional retail sector, showing that this area may remain a strong and viable competitor to e-commerce companies.

The continued strength and profitability of retail lending contributes to the CMBS loan market. Outstanding retail loans currently make up approximately 27% of all outstanding CMBS notes, while 25% of total net operating income for CMBS is tied to retail properties . The continued profitability is driving continued growth in CRE lending. Retail loan exposure at banks is difficult to pinpoint because it is not reported separately on the call report; however, in 2017, Frederick Cannon, global director of research at the investment bank Keefe, Bruyette & Woods, estimated that banks have half of the market's $571 billion in outstanding retail-related CRE loans. More importantly for state examiners, CenterState Bank estimated in early 2016 that nearly a quarter of community banks' overall CRE exposure is related to retail property.  Total real estate loans have gone from $3 trillion before the crisis to approximately $4.5 trillion April 2019.  That includes more than $2.2 trillion in residential real estate CRE loans.

Mortgage Bankers Association’s report shows a positive picture of retail, noting that although retail property vacancy rates rose from 10.0% to 10.2%, their rents were up 1.6%, showing that landlords were confident in their tenant’s business prospects. According to MBA, commercial and multifamily property sales transactions rose in 2018, with $484 billion of sales of office, apartment, retail and industrial properties – a 14% increase from 2017. Specifically, the increase was driven by a rise in entity-level transactions, which pushed retail properties up 32%.

While many different types of retail businesses occupy CRE properties, drug stores stand out as the best performing. In January 2019, Trepp examined 16,678 retail loans that had been outstanding within the past five years2. Trepp analyzed the performance of these loans using the following metrics: occupancy rate at securitization, net operating income per rentable square foot at securitization, minimum occupancy during the loan’s life, minimum NOI PSF over the loan’s life and the loan’s worst delinquency status. Drug stores stood out from their peers with slightly more than 70% of drug store loans found to be in the top 20% of Trepp’s retail CMBS ranking. Drug stores are often single tenant (“retail property with a single-tenant”) and are an industry that have yet to be disrupted by e-commerce. It is worth noting that Amazon completed its $753 million acquisition of online pharmacy startup Pillpack in March 2019 with eyes on the more than $500 billion prescription drug market.

Trepp’s report also emphasized the quality of single tenant properties. The group was rated as an “outperformer “compared to diverse tenant properties. The continued dominance of many big-name single tenant companies may support Trepp’s data and confirms that it is not just online retailers taking market share from closing competitors but many of their brick-and-mortar counterparts whose business models have proven to be relatively successful.

Major big-box retailers such as Costco, Walmart and Home Depot have all enjoyed robust success due to sound business strategy that, amongst other keys, rewards shoppers for shopping in-store and building out competitive ecommerce capabilities. Per Yahoo Finance, “Costco once again made incremental progress in expanding the size of its global store network. The company added three new locations in the past three months, bringing its total to 773.”  Burnishing brick-and-mortar processes with their own e-commerce growth may be critical to these firms continued success.

Third-party service providers such as shipping and logistics firms or online payment providers may provide the ability for smaller companies to keep up, but this is an area where the bigger companies have a competitive advantage. E-commerce has been critical to Costco keeping up with their fast growing internet rivals with e-commerce comps up 22% from a year prior.

Strip malls buoyed by large successful tenants have managed to function normally as well.  Access and convenience seem to be the main selling point to e-commerce, and major retailers are beginning to roll-out strategies to counteract this, including downsizing their retail space. The retail downsizing is most apparent in local shopping and strip centers. Per Bisnow and BET Investments President Michael Markman, “Landlords have been chopping up larger boxes and redeveloping them to fit multiple new tenants. The initial process is capital-intensive and is not always feasible, but more than pays for itself if leasing is a success.”

Over the past three decades, certain segments of retail have performed better than others and many of those can be found in neighborhood centers. At the beginning of the year, Axios reported on change in storefronts per capita from 1990 to 2017 (see Figure A). 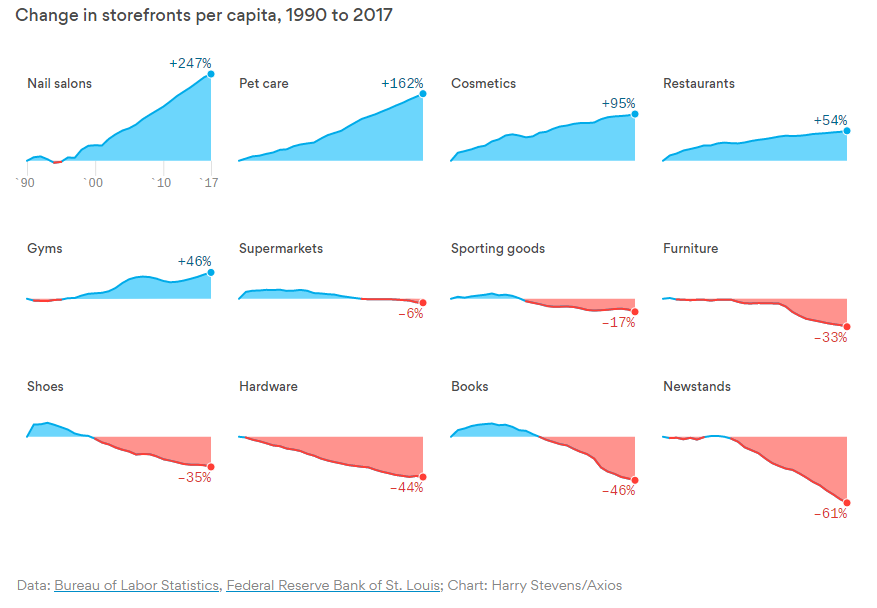 As Axios puts it, there is a “common theme among the victors: The offerings can’t be easily replicated onlineService oriented businesses appear to be much more resistant to e-commerce disruption and are typically found in strip-malls.

Strip malls are often buoyed with a lead tenant, often a big-box store, that is referred to as an anchor store. Anchor stores drive foot-traffic into the smaller surrounding stores. Serving as the anchor store in a strip mall has also been profitable for more traditional retailers such as TJX Companies, which is the parent of TJ Maxx, Marshall’s and Homegoods. Off-price retailers3 thrive by offering discount opportunities and providing consumers with the thrill of the hunt in the form of rows of discount racks. Per Motley Fool, “TJX added 236 stores around the world last year, bringing its total count to 4,306, but the company has big plans for expansion, seeing room in the market for 6,100 stores globally. That includes 3,000 Marmaxx locations in the U.S., up by about a third from its 2018 total, and 1,400 HomeGoods stores, nearly double the 2018 figure.” The success of these stores tracks with broader theme that Deloitte recently reported on, that there are large growth rates of low-priced and premium retails while mid-price retailers have been left behind. Deloitte calls this the “great retail bifurcation.” That bifurcation and the success of stores often found in community shopping centers and strip malls has led to neighborhood and community shopping center vacancy rates today actually being lower than in 2012 (10.9%) and remaining relatively steady into 2018 and Q1 2019 (10.2%)4.

Malls are performing worse than strip malls and their standalone retail counterparts (see Figure B). Malls in Q1 2019 had a 9.3% vacancy rate - a high since the crisis, but still a relatively manageable level. Malls house fewer of the service-oriented businesses that populate strip malls. Due to their sheer size, service businesses within malls are harder for the consumer to access. 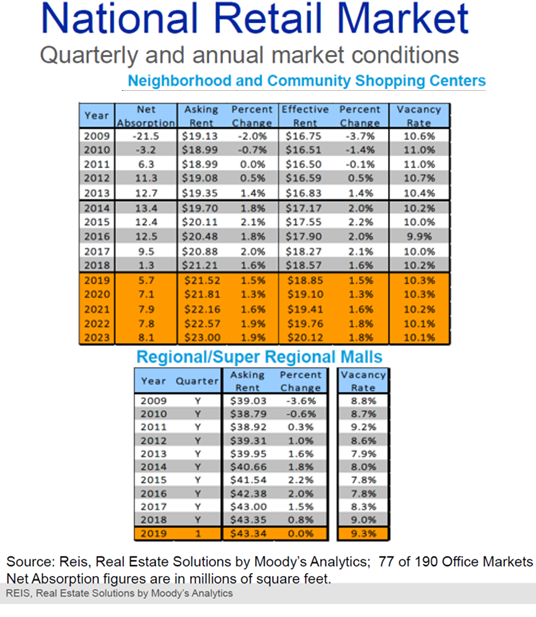 Malls seems to be also heavily dependent on anchor tenants which have underperformed. Even in the anchor tenant space, there have been winners and losers. Sears filed for bankruptcy earlier this year after a long public fight for survival, but famed anchors such as Nordstrom and Macy’s have managed to stay profitable with strategies including omni-channel retailing, adding outlet shops within their stores (i.e. Nordstrom Rack and Macy’s backstage) and improving their merchandise forecasting. Superregional malls (regional malls but with more variety and assortment) perform much better than their smaller counterparts with the vast majority of their CMBS rated in the top 50% by Trepp versus the bottom 50% for regional malls.

A robust economy appears to have helped to stave off risk and has led to a downtrend in retail loan delinquencies, but even so retail lending remains the class of CRE with the highest delinquency rate. Emerging risks include the administration’s trade wars and tariff-based offensive with China and more recently threatened tariffs to Mexico and Europe. While consumer sentiment remains high, “confidence has significantly eroded in the last two weeks of May” with mentions of tariffs being mentioned by 35% of consumers in the University of Michigan Consumer Sentiment Survey. One potential example of a direct tariff impact in retail is Abercrombie & Fitch. While the retailer admitted to sales declines in the face of lighter foot traffic at shopping malls, their executives also noted that they were “wary of the U.S. China trade dispute” as it could lead to higher prices for consumers (25% of the company’s production is done in China).

As noted above, for the past year, the U.S. economy is at full strength, and consumer spending has largely kept pace with growth in e-commerce. Even in the current environment, major retailers including Payless, Sports Authority, Sears and Mattress Firm have become bankruptcy victims; a full list is available here. When the cycle ends, it is possible imbalances will grow and defaults will rise. Banks that forecast appropriately and adjust their lending portfolios towards companies that have proven more resistant to e-commerce can continue to profit from retail lending.

As discussed above, e-commerce’s disruption of traditional retail has contributed to a spike in retail bankruptcies which in turn has put pressure on CRE retail lending. For examiners, it is important to note that many struggling borrowers “continue to be creditworthy consumers who have a willingness and capacity to repay their debts…in such cases, financial institutions and borrowers may find it mutual beneficial to work constructively together.”

The federal banking agencies recently updated existing supervisory guidance on evaluating institutions’ efforts to renew or restructure loans to creditworthy CRE borrowers. An institution’s risk management practices for renewing or restructuring CRE loans should include a thorough financial review of the borrower to ensure repayment capacity and collateral value, as outlined here. Loan workout arrangements should be considered when feasible, and this can be done through renewals or extension of loan terms, extension of additional credit or restructuring with or without concessions.

It is prudent for both banks and regulators to keep an eye on retail lending and e-commerce growth. Concentrations naturally increase risk. As with any type of investing, diversification is important. Examiners should continue to keep in mind changing economic trends that could put those concentrations under stress.