Community banks have been at the forefront in providing needed funds to small businesses across the country as the 2020 COVID-19 pandemic and subsequent lockdowns have severely restricted U.S. economic activity.

Our analysis of the Paycheck Protection Program (PPP), created in April by Congress as part of the Coronavirus Aid, Relief, and Economic Security Act (CARES Act), shows that community banks (using the FDIC definition) had a disproportionately greater  share in lending to small businesses than their larger and more complex counterparts.

That comes as no surprise. With their long-term relationships and specialized knowledge of local markets, businesses, and customers, community banks proved their ability to make PPP funds available quickly and efficiently to businesses in need of credit.

Now that the funds have been expended and the U.S. economy is still unstable, there have been calls for more economic stimulus. We believe Congress should provide additional PPP funding for small businesses, and when it does, community banks are well-positioned to serve their local communities.

Known for their relationship lending and their personal connections to customers, community banks have always prided themselves in supporting small businesses in their local communities. At present, the ICBA reports that community banks provide more than 60% of small business loans nationwide. So, when Congress passed the CARES Act, community banks rose to the occasion, even though in many cases the fee income did not offset the additional burden.

CSBS Bankers Advisory Board member Kim DeVore, who is  president of Jonah Bank of Wyoming, told us her staff worked long nights and over weekends to ensure their clients were able to make it into the PPP funding queues quickly and efficiently.

“Our focus has always been on building a better Wyoming by serving small businesses and giving back to our communities. I’m very proud of our team’s dedication to make a difference in this crisis by delivering PPP loans to eligible small businesses. It is truly one of Jonah Bank’s shining moments,” Devore said.

The Importance of Community Banks in Implementing the PPP

As shown in the map below, community bank participation in the PPP was not limited to one area of the country but occurred across America. In most states―those highlighted in greenish tones on the map―more than 80% of the state’s community banks participated in the PPP.

Moreover, community banks facilitated many of the smaller-dollar loans in PPP. While the pandemic hit businesses of all sizes, small businesses often don’t have the cash reserves needed to weather several months of lost revenue. As shown in the chart below, the average community bank loan amount is smaller, likely implying that they helped smaller businesses more than larger ones. 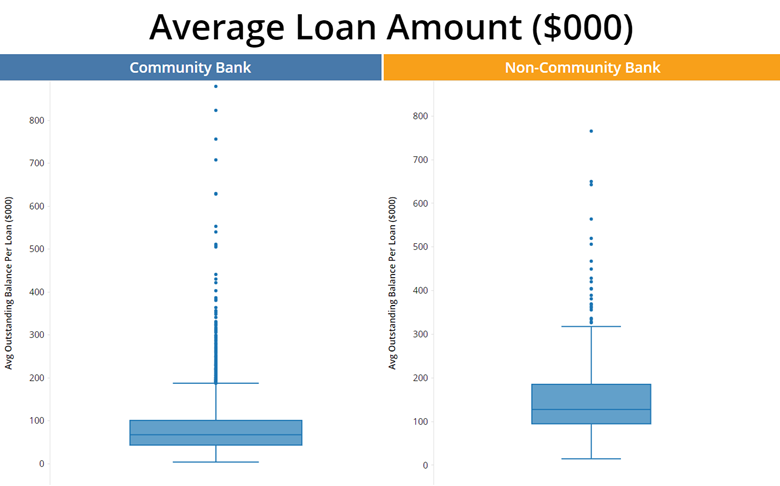 To facilitate the PPP, community banks had to quickly learn new systems and procedures while employees worked remotely in an untested environment of extraordinary demand and unknown supervisory consequences for participating in the program. 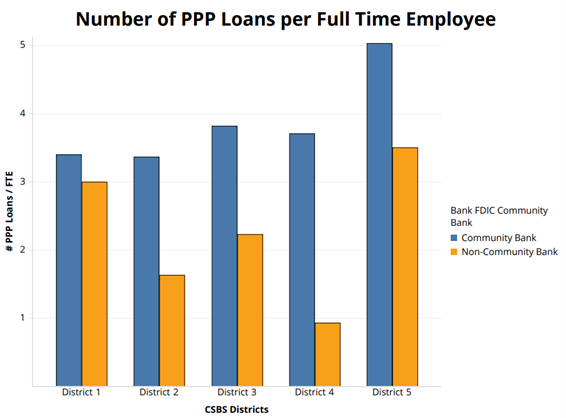 However, community banks are concerned about heightened uncertainty and a heavier regulatory burden over the coming year. One potential PPP pain point for community banks is that new assets on their books may cause some institutions to cross certain supervisory thresholds. Many community banks experienced large cash inflows from participation in the PPP, and perhaps also from other government stimulus efforts.

After months of uncertainty, the Office of the Comptroller of the Currency, the Federal Reserve Board and the Federal Deposit Insurance Corporation (FDIC) recently issued an interim final rule (IFR) permitting banks under $10 billion in total assets as of Dec. 31, 2019 to use asset data from Dec. 31, 2019 in order to determine the applicability of various regulatory asset thresholds during 2020 and 2021. A chart detailing which of the numerous thresholds are affected under this IFR is available here. Before this larger IFR, the FDIC also approved another interim final rule to provide relief for the $500 million audit requirement. Congress also advocated for threshold relief for institutions that participated in PPP.

What’s Next? PPP Round Two?

To be most effective, government economic stimulus measures should be timely, temporary and targeted. While the PPP rollout had some initial setbacks, the program appears to have been very successful in quickly getting needed funds to businesses that were punitively impacted by the pandemic and subsequent lockdowns.

PPP loans were made available to businesses to pay up to 24 weeks of eligible expenses. But the SBA only accepted applications for PPP loans over roughly a four-month period from April 3, 2020 through Aug. 8, 2020. So, with the original PPP funding period over and many businesses having depleted their PPP funds and still suffering from continued shutdowns and other pandemic-related business disruptions, it seems that an additional round of PPP funding is needed.

Indeed, the Wall Street Journal reported that about 300 companies that received PPP loans have filed for bankruptcy. And in September, Federal Reserve Chair Jerome Powell said that the PPP could continue to “do a lot of good” since it may take longer than officials initially thought for some small- and medium-sized business to come back online. Powell maintained that a second round of PPP funding is a better option than the Fed’s lending facility because it reaches businesses directly.

While Congress has been unable to reach an agreement for more pandemic relief, most drafts of another government stimulus package include a second round of PPP funding. And although the details need to be worked out regarding lending limits, business size restrictions, etc., it is almost certain that community banks will be critical to facilitating a second round of the PPP. We are confident that they will be ready and willing to meet the challenge.

To be sure, the Community Bankers Association of Illinois recently surveyed more than 300 community banks in Illinois on the PPP and found that more than 95% said they would participate again in another round of PPP lending.

Deborah Hagan, Secretary of the Illinois Department of Financial & Professional Regulation, told us, “As Illinois and other states across the nation continue to feel the economic impact of COVID-19, it is imperative that the federal government release another round of PPP loans targeted to smaller businesses. For the state’s business community to recover, they need a more streamlined process for loan forgiveness from the federal government so local banks can continue assisting Illinois residents most in need.”

The PPP filled a crucial role in swiftly providing credit to businesses in a time of crisis. But the program’s success would not have been possible without the nation’s banks. And community banks, in particular, displayed an outsized role as a funding conduit. In a recent speech at the “Community Banking in the 21st Century” research conference co-hosted by CSBS, the Federal Reserve System and the FDIC, Federal Reserve Governor Michelle Bowman said about the PPP, “community banks were absolutely essential to the success of this program.”

Community banks’ relationship lending model creates that kind of added value. Indeed, community banks were well-positioned to serve their local communities and did so with determination and dedication. And now it is up to Congress and financial system regulators to give community banks the additional support and latitude they need to further assist American businesses.