How Low Will Confidence Go?

The CSBS second quarter 2022 Community Bank Sentiment Index (CBSI) fell to its lowest level since the creation of the index in 2019. The overall index was driven down by record low readings in three of the index’s seven components: regulatory burden, the impact of monetary policy, and expectations for future business conditions. In an open-ended question, community bankers voiced concerns over rising inflation, particularly energy and commodity prices, the impact of rapid interest rate increases, and the potential for slower economic growth.

As shown in Chart 1, the headline number from the second quarter 2022 CBSI was 84, thirteen points below the level recorded last quarter and 31 points below a year ago. With a value of 100 considered neutral, community bankers turned pessimistic in the first quarter of this year, with the overall index subsequently plummeting to a record low. 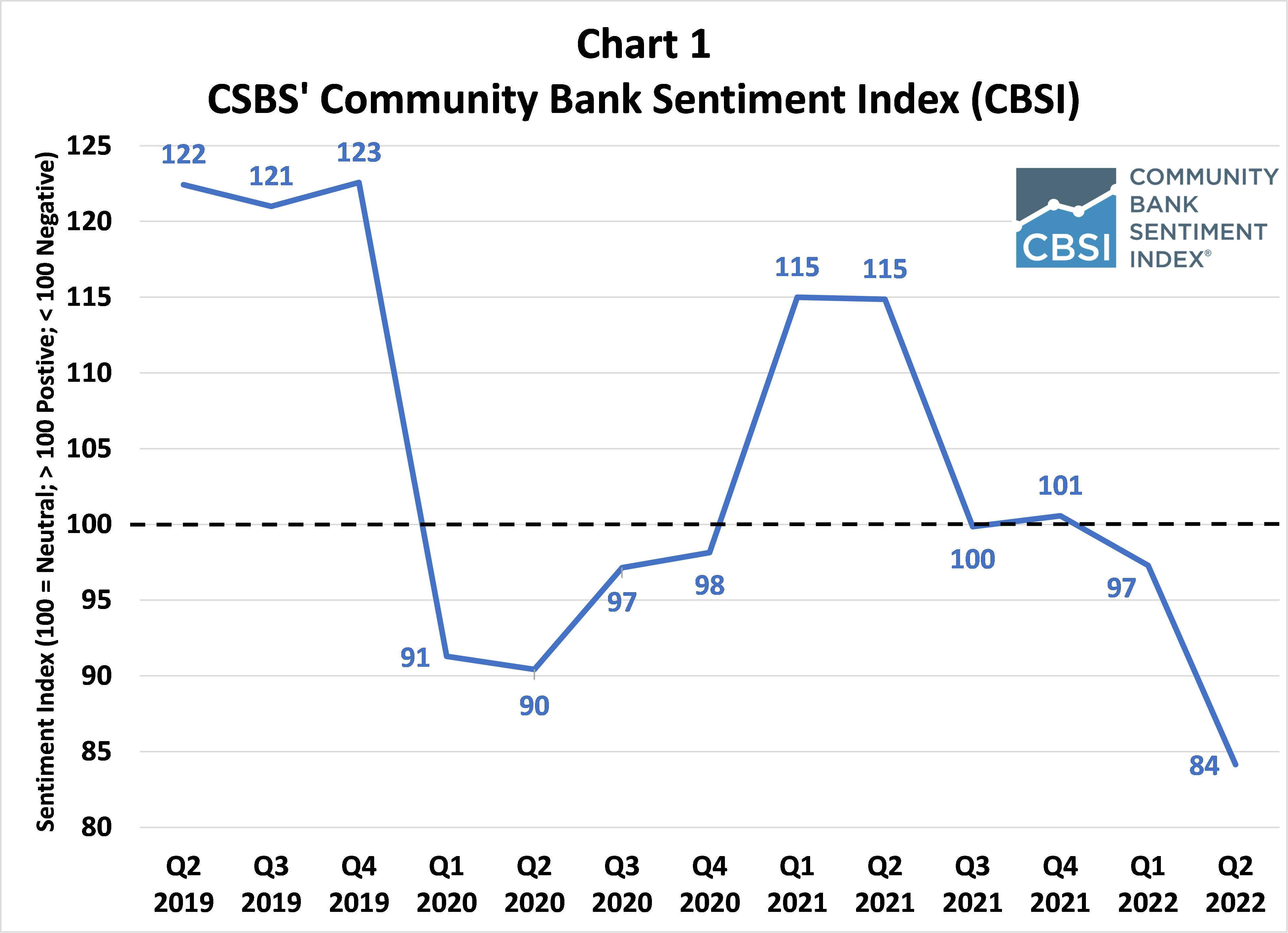 The significant drop in the CSBS second quarter 2022 CBSI is consistent with declines in several other national confidence indicators. The University of Michigan’s Consumer Sentiment Index, which started publishing results in 1952, fell to an all-time low in June 2022; and the NFIB’s Small Business Optimism Index slumped in June to its lowest reading in nearly 10 years. Moreover, the NFIB component that measures small business expectations of future business conditions fell to its lowest level in the 48-year history of the survey.

As shown in Chart 2, three of the seven CBSI components remained below the neutral level of 100, compared to the previous quarter: regulatory burden (20; down 8 points); monetary policy (33; down 62 points) and business conditions (38; down 45 points). And three CBSI components remained above 100 during the past quarter: capital spending (139; up one point); operations expansion (134; down 6 points), and franchise value (124; down 5 points).

On the bright side, and in sharp contrast to the other six CBSI indicators, the profitability component moved from negative sentiment to positive, increasing 33 points from 68 in the first quarter 2022 to 101 this quarter. 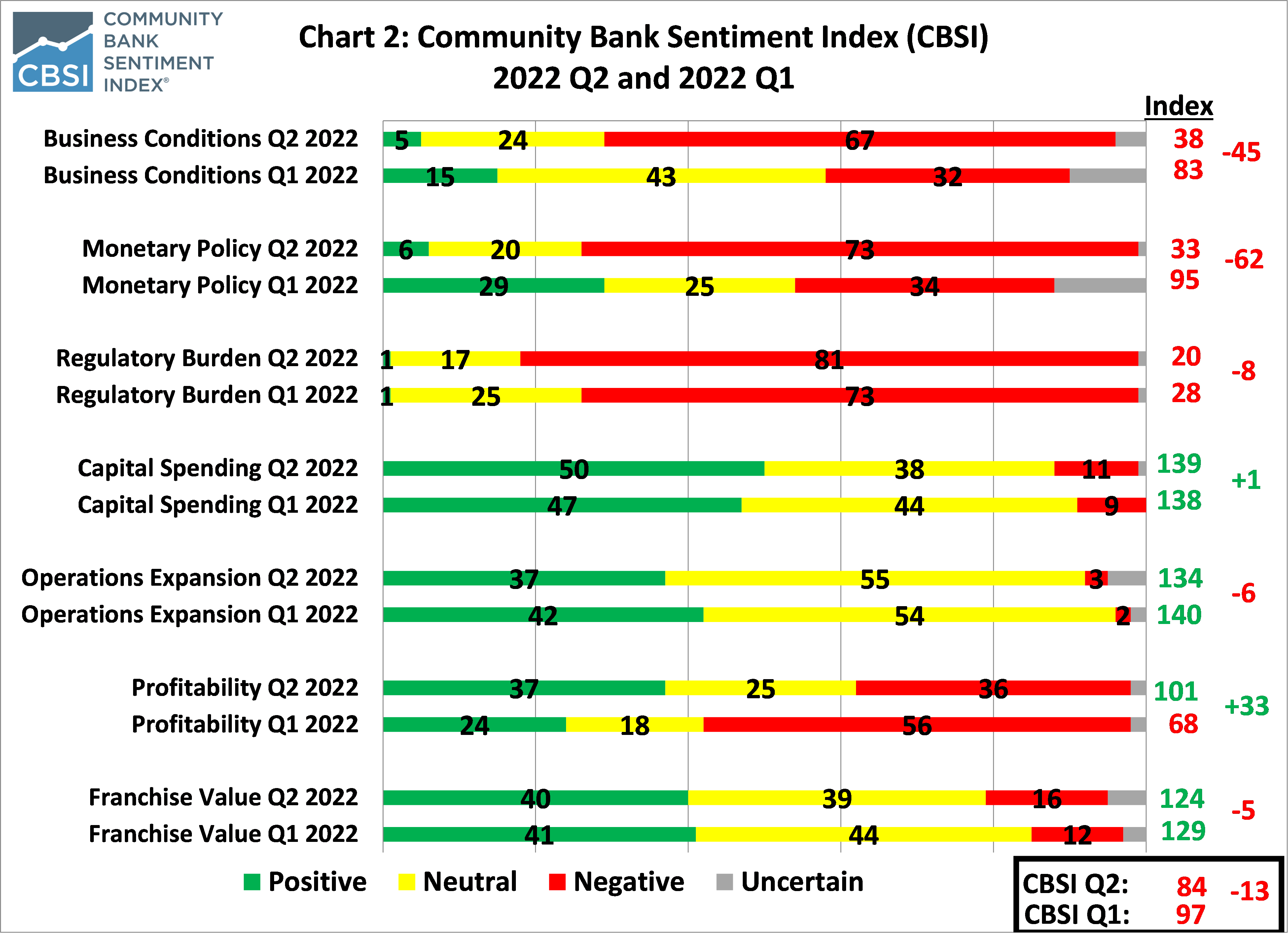 Chart 2 also displays the percentage of positive (green bars), neutral (yellow), negative (red), and “I don’t know” (grey) responses to the seven factors that comprise the index. Using the interactive dashboard on the CBSI webpage, I took a deeper dive into the survey responses to examine sentiment by how each group of respondents answered any specific question. And because previous research found that community banker expectations on profitability tended to drive their overall sentiment, I analyzed how bankers expecting higher profitability differ from those expecting lower profitability.

At 101, overall sentiment for the profitability component was very close to the neutral level of 100. Chart 2 shows there is a fairly equal distribution of responses: 37% indicating higher profitability over the next year, 36% expecting lower profitability, and 25% anticipating profitability will remain the same.

As shown in Chart 3, community bankers expecting higher future profitability have an overall positive sentiment of 116, a value that is 32 points higher than the overall reading of 84. However, as a group, these bankers still have negative sentiment regarding future business conditions (component index = 63), monetary policy (59), and regulatory burden (17). 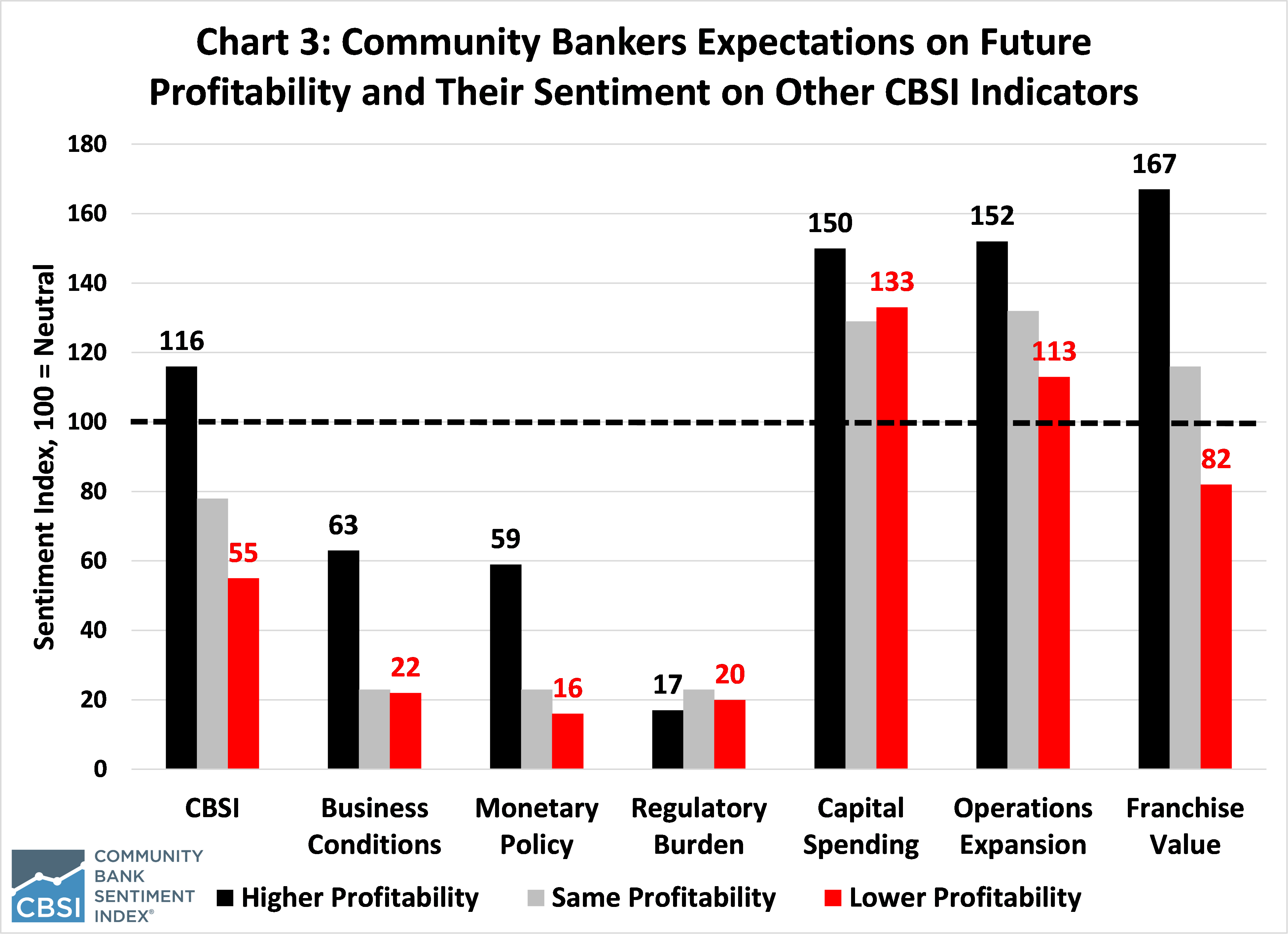 In stark contrast, community bankers expecting lower future profitability have an overall negative sentiment of 55, which is 29 points below the overall index. And they have negative sentiment of 22 for future business conditions, 16 for monetary policy, and 20 for regulatory burden. In addition, the franchise value component among these bankers also turned negative at 82.

The other two components with a large gap between bankers expecting higher profitability from those expecting lower profitability are monetary policy (43 points) and business conditions (41 points). This seems to indicate that community bankers’ overall sentiment and outlook is strongly related to their perspective on the impact of the Federal Reserve’s monetary policies and how harsh future business conditions might get.

Interestingly, community bankers expecting lower profitability are still relatively bullish on capital expenditures (133) and expanding operations (113). While the values are not as high as they are for bankers anticipating higher profitability (capital expenditures at 150 and expanding operations at 152), the metrics seem to reflect some degree of business-as-usual, at least in the longer-term, despite other negative sentiment.

Finally, it is worth noting that community bankers’ negative sentiment regarding regulatory burden is extremely low, regardless of their view on future profitability (17 for bankers expecting higher profitability and 20 for those expecting lower profitability). The regulatory burden component has been in negative territory since the survey’s inception, falling from its peak of 78 in the first quarter of 2020 to a value of 21 in the first quarter of 2021, and it has remained in the 20’s since then.

The CBSI survey also includes some special questions, one of which asks community bankers to rate their level of concern from “not at all” concerned to “extremely” concerned on a variety of responses. Consistent with the above analyses and as shown in Chart 4, community bankers are worried the most about inflation, which was also their top fear in the first quarter 2022 survey. The next four top concerns―cost/availability of labor, government regulation, cyberattacks and federal debt/deficit―have remained among the top five over the past three surveys. 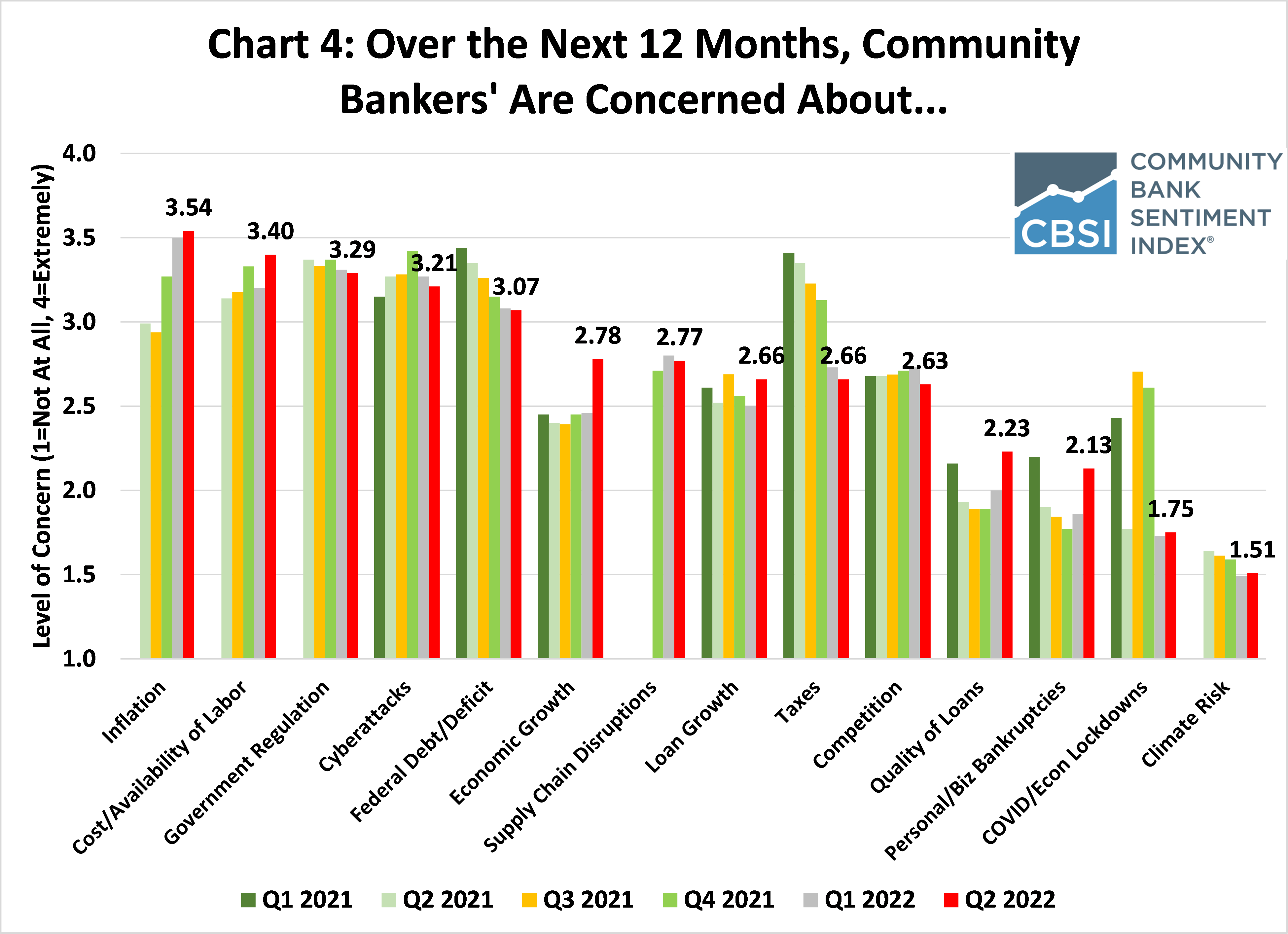 Community bankers’ anxieties about rising inflation, combined with their outlook that monetary policy decisions will negatively impact markets and that business conditions will deteriorate, have led to a worsening outlook. Indeed, an outlook that is currently at a record low. The silver lining is that most community bankers still have plans to expand operations and increase capital spending.

But until expectations regarding the inflation outlook and future business conditions improve, the sentiment of consumers, small business owners and community bankers will go even lower.