Adapting to the Digital Age: Tech Investment and Mergers and Acquisitions

Blog 6 of 7: Tech Investment and Mergers and Acquisitions

Adapting to the Digital Age Series

In this seven-part blog series, we explore how community banks are adapting to a changing digital landscape by analyzing banking and technology questions from the 2021 CSBS National Survey of Community Banks. Survey results are presented each fall at the annual Community Banking in the 21st Century Research and Policy Conference, sponsored by CSBS, the Federal Reserve and the Federal Deposit Insurance Corp.

In the sixth installment in this series, we examine how community bankers view investments in technology with respect to mergers and acquisitions.

In our previous blog post, we found that community bankers were most satisfied with their core service provider’s security, risk management and tech sophistication and least satisfied with innovation speed, cost and contract flexibility. The ability to achieve scale economies from the technology base through either improved efficiency or growing revenue is the key ― and is also easier said than done.

Although the pressure from rising regulatory costs appears to be abating based on the most recent CSBS Surveys, the need to meet competitive pressures from larger banks with significantly higher tech budgets and innovative fintech companies is a formidable obstacle. These pressures are reflected in the continued decline in the number of community banks over the past 40 years, and especially since the 2008 financial crisis. In just the last five years, the number of commercial bank charters have fallen by roughly 811, from 5,112 in 2016 to about 4,301 near the end of 2021. Most of the decline is state-chartered community banks (719), continuing a long-term trend since the mid-1980s.

With this decline, it should be no surprise that economies of scale are cited by community bankers as the number one reason for either making an offer for another bank or for consideration of an offer to sell. Since 2018, the annual CSBS Surveys has asked community bankers if they considered an acquisition offer in the last 12 months or if they made an offer to buy in the last 12 months. Table 1 shows the responses to these questions since 2017. Offers to buy continued to be reported by fewer banks in 2021 (12%) following the big drop in 2020 from previous years because of the pandemic, excess liquidity, and slow loan growth (outside of the Paycheck Protection Program).

Respondents were also given the opportunity to state the reasons for the action, e.g., succession challenges, costs of doing business, importance of expanding or importance of economies of scale, which are shown in Table 2. Ninety percent of those reporting the initiation of an acquisition offer identified the importance of scale as the reason in 2021, up from 76% in 2020 and the highest in the four years the question has been asked. Likewise, for those banks receiving an offer to sell, 67% reported scale economies as important to the consideration. Although regulatory costs and succession issues are oft-given reasons for small bank sales, they are much less important when adding together the “important” and “very important” responses than scale or cost of doing business―which could include regulatory costs. 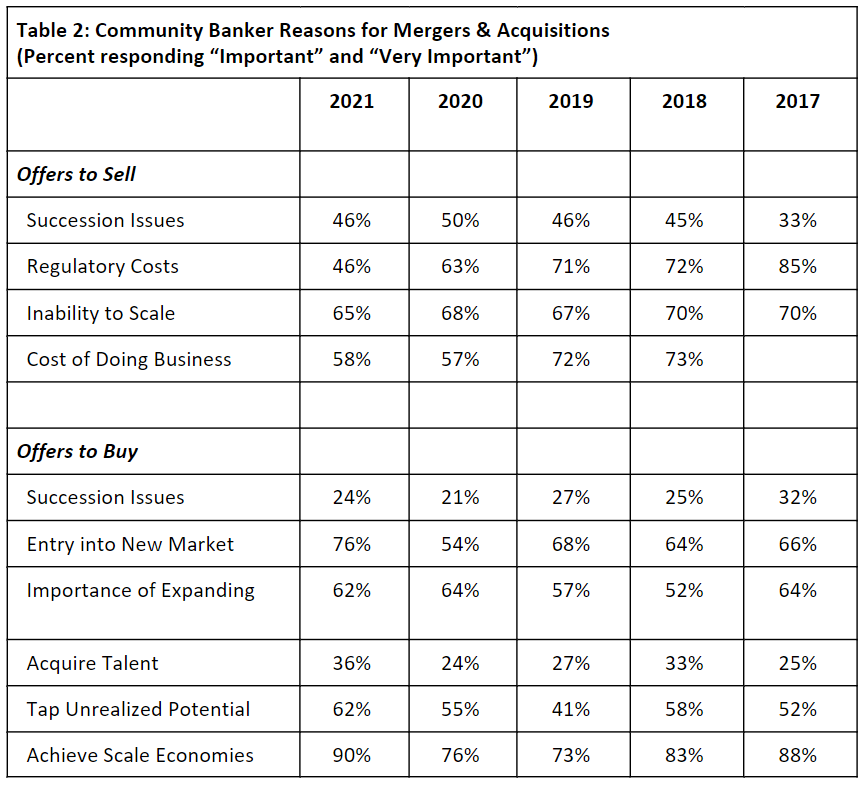 Tech investment could be a potential driver for acquisition. Community banks that have made a substantial investment in technology are well positioned to expand their business at a lower variable cost. If organic growth opportunities are limited, then M&As are an alternative to achieving scale economies. In support of this argument, Chart 1 shows that 18% of the high tech-usage banks reported an offer to acquire another bank versus 12% overall. Interestingly, the incidence of reporting an offer to sell shows no association with tech usage. 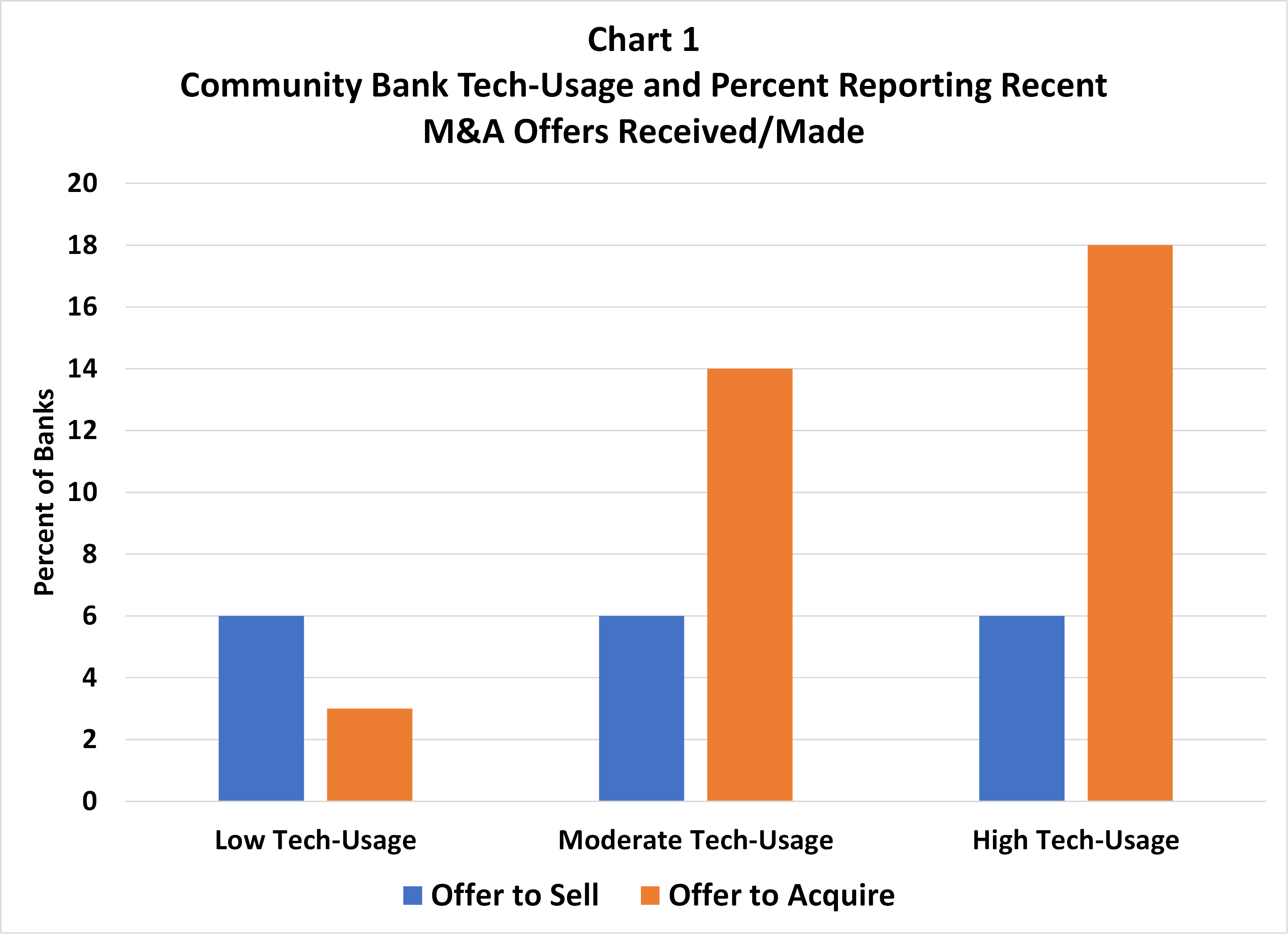 As community banks continue to consolidate, the CSBS Surveys find that mergers and acquisitions are being driven by a desire to increase economies of scale, a far more important reason than regulatory costs and succession issues. While fewer banks appear to be considering buy/sell offers, high tech-usage banks are more likely to offer to acquire another bank.

Thus far, this series on Adapting to the Digital Age: Community Bankers’ Perspective on Technology has highlighted the rich set of information on technology usage provided in the annual CSBS National Surveys. While many important insights were identified, there are still many other important technology issues outside the scope of the survey. For example, what are the specific issues community bankers have with core service provider pricing and product development and how are they responding? What other ways are community banks interacting with fintech firms? And finally, what are community banks doing with the opportunity that tech is providing them?

In our next and final blog in this series, we address these questions from recently completed telephone interviews with community bankers from around the nation.